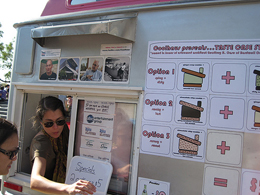 The food truck craze began in Los Angeles, and now some people involved in the street food community say it’s already over. A piece in the LA Times quotes Josh Hiller, a partner in food truck outfitting business RoadStoves, as saying, “the problem came when the other commissaries and truck owners saw money and basically just prostituted the whole culture.” So to keep it “real” he’s rejecting 95% of requests for a truck.

Food truck malaise! Evidence that the trend is over: copycat trucks by people with “no culinary experience” looking to make money, corporate trucks from chains like Jack in the Box and Sizzler, and even the Food Network co-opting the craze with The Great Food Truck Race.

The “exciting, underground food scene driven by a punk rock aesthetic and an exploratory mentality”? It’s done. Kogi BBQ truck’s Roy Choi winning Food & Wine’s Best New Chef award last year — while a very respectable accolade — was anything but “underground.” Perhaps the award can now be seen as the signifier of the end of the food truck trend.

Now some popular LA food trucks are getting into the new new trend — brick-and-mortar restaurants. The ice cream truck Coolhaus has expanded to Austin and New York and is planning a Southern California store that will “employ a neat ‘inside-out’ meta-twist that is sure to blow food truck followers’ minds.” The store will consist of a food truck parked inside a building.