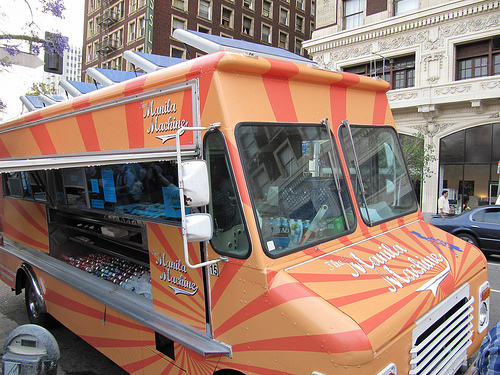 Oh, such a bummer.  On Friday – yes, April Fool’s Day, except it wasn’t a joke – one of the better food trucks out there, the Filipino food-slinging The Manila Machine, announced it no longer was going to operate the food truck side of its business, at least for a while.

Nastassia Johnson and Martin Gapultos launched the truck last June and really was one of the very few trucks to be actually quite good.  Based on their first statement (there are two, the second of which we’ll get to in a hot second), the two will focus on catering so they can pursue other opportunities: Gapultos is looking forward to writing a cookbook, and Johnson is weighing her next venture.  And (maybe most importantly), now that they don’t have the 23/7 job that is running a small business on wheels, they can get some much needed family and friend time.

Their explanation, and all the gossip fit for your elementary school playground, after the jump.

As Gapultos posted on Friday:

We are fortunate that with the success of The Manila Machine, we have been afforded some great possibilities beyond the realm of food trucking. And we’d be crazy to not dive head first into these new opportunities.

For me, a new cookbook is in the works. And for Nastassia, a few new business opportunities are on the table for her choosing. If these aren’t good enough reasons to give up grueling work days on a food truck, we don’t know what is.

And thankfully, by focusing on catering for the next few months, Team Manila Machine will have more time to spend with our family and friends, as well as more time to dedicate to our individual projects.

So, I will miss them terribly, because I loved their chicken adobo and longganisa sliders, and I loved their Barney-purple ube cupcakes, and I loved their love for their food and very much appreciated their goal to open a world of new flavors to people who otherwise would never wander into a Filipino restaurant.  But, if closing their food truck is what they think is right for them right now, I’m happy that they’ll get a chance to see what else is out there, and see how they can achieve that whole mysterious work-life balance thing that magazine tells us exist, somewhere, over the rainbow, possibly.

For a totally different take on all this though, see Zach Brooks over at Midtown Lunch.  Brooks makes some very valid points about the difficulties of running a food truck and makes quite an arguable point that food truck owners have something just short of a community obligation to stay in business for the long term even if life compels them in a different direction after the short.   And while he cautions that “I don’t actually know the real reason Manila Machine is closing up their truck”, he also titles his post “Manila Machine Should Tell the Truth: They’re Closing (Their Truck) Because Running a Food Truck Sucks.”  All is fair in love and war, I guess, but I would hope that if you were going to take someone to task for not telling the truth, then you actually have a big enough hard drive to back yourself up.  Brooks – unfortunately – doesn’t have any evidence to substantiate his speculation that The Manila Machine is closing its food truck arm “because running a food truck sucks”, and so we’re left with a cart standing in the way of our view of the horse.  The Manila Machine posted their response last night.

On a happier note, a photo of their ube cupcake is here.  See you on the other side of the rainbow, guys.

Photo courtesy walterrrr via Flicker and used under a Creative Commons license.