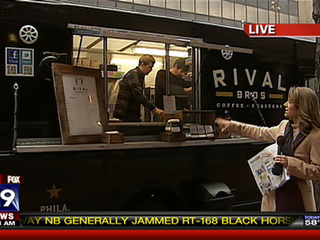 The sound of Sonny Rollins’ sax and the sizzle of grass-fed meat were wafting through the open window of the Lucky Old Souls Burger Truck the other day. And the sensory combo wafting over the hungry crowd gathering at LOVE Park was so potent, the first customer in line was moved to ask: “Are you guys on the Food Network yet?”

“Not quite yet,” said Matthew “Feldie” Feldman modestly. “We’ve only been open five weeks.”

But if anyone appreciates life in the fast lane of Philly’s accelerating food truck scene, it would be Feldman. He has spent three years trying to open an actual brick-and-mortar restaurant-jazz club in South Philly called Lucky Old Souls (“and I still don’t have a target date”). So, eager to get the brand going, he bought a food truck in July and was on the road by mid-October, serving up $9 patties topped with house-smoked bacon, house-pickled tomatoes, and secret sauce.

“We’re basically a restaurant on wheels – not the trucks and carts of yesterday serving cheesesteaks out of a package onto a grill,” Feldman said. “We’re making things from scratch.”

Lucky Old Souls is hardly the only truck bringing artisan effort to the city’s mobile eating scene. In fact, the sudden growth in new offerings, especially in the last few months, is turning into one of the most dynamic Philly food stories of 2011. There are wood-fired-oven pizza trucks turning-out Neapolitan-style pies, trucks cooking with locally sourced ingredients, and trucks focused on vegan noodle soups. The barbecue-themed Smoke Truck from ex-Bebe’s pit-master Mark Coates and his partners from the Wishing Well began its brisket runs this week.

There are trucks brewing high-end coffee, a cart draped in orange prayer flags steeping serious loose-leaf tea. A yogurt truck, a handmade-pasta truck, a vegan hoagie cart, and a farm-to-table truck are reportedly also in the works. And there is competition – in cupcakes, in tacos, in crepes, even with gourmet grilled cheese, as evidenced by the two new trucks that have found themselves pressing gooey sandwiches almost side-by-side on the same block of Temple University’s campus.

The truck revolution has not only created more eating options, but has also begun reshaping the way we view and use public spaces like LOVE Park. Since its sidewalk was opened to selected vendors a year ago, it has become Center City’s prime showplace for some of the most intriguing new-generation trucks, which in turn, have drawn unprecedented energy to a park that has been in limbo for years.

“We’ve done music programs and art programs,” said Timothy Gill, director of marketing and promotions for Philadelphia parks, “but nothing has generated the same level of excitement that the food trucks have.”

This boom – which extends well beyond LOVE Park to university zones in North and West Philly – is long in coming. To be sure, Philly has a venerable tradition of street food vendors – even former Mayor John F. Street (and his brother Milton) once ran hot dog carts at Temple. But aside from some existing bright spots at Penn, we’ve lagged well behind the more ambitious food truck movement that has been thriving in other cities (New York, Los Angeles, Portland, Ore.) for years.

The opening of LOVE Park, however, has proved a gateway to a crucial district that had previously been inaccessible to roving trucks due to street restrictions. The Food Trust’s flourishing farmer’s markets and wildly successful pop-up Night Markets, meanwhile, have been an effective stage for many of the new trucks to debut. Add in the crucial self-marketing tools of Twitter and social media, which allow trucks to disseminate their locations and daily specials, and any dreamer with four wheels and a griddle has the potential to connect with a hungry audience.

“The explosion in social media is fundamental to what the food truck is in this decade – that ability to brand yourself,” said Andrew Tantisunthorn, who runs the weeks-old Yumtown truck at Temple with partner Lanie Belmont. “But it’s also part of a broader trend of [young] people reinvesting in cities, in this sense of craft and individuality and entrepreneurship.”

“Food trucks are dynamic,” agreed Andrew Gerson, a former restaurant chef who plans to open a fresh-pasta truck called Strada soon. “I’m 29 and I don’t want to be stuck in a restaurant any more. I felt a lot of disconnect being in the back [of a kitchen] and putting out numbers. Food trucks breathe community in a way restaurants can’t.”

But can they really cook?

I spent the last several weeks adventuring through some of the city’s hottest new food-truck zones putting these newcomers to the test. Some of what I ate did not quite live up to the hype and next-generation prices. But much of what I encountered was also downright inspiring – worth standing in line for even as the chill of a first winter for our new food-truck revolutionaries settles in.