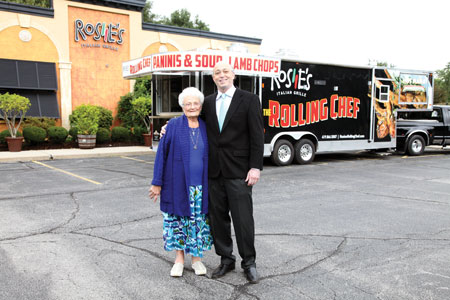 The truck is open from 11 a.m. to 1:30 p.m. Tuesday through Friday. On Tuesday and Thursday, the truck stops at St. Clair Street across from Levis Square; in Downtown on Wednesday, it’s at Regency Court off of Talmadge Road; and on Friday it can be found at the office buildings at 3103 Executive Parkway near Westgate.

Rosie’s owner Phil Barone said he had been thinking about expanding the restaurant to include a truck for a while, but did not take the idea seriously until family members returned from a trip to Seattle.

“It was an idea from my brother and sister-in-law,” Barone said. “Both came to Rosie’s and said they were out in Seattle and had seen a lot of food trucks. They thought it would be a great fit for Rosie’s. I thought about it a couple of years ago and let it go, but that conversation rekindled the fire to actually do it.”

Barone searched online to find a truck suitable for the “restaurant on wheels” and finally came across the perfect fit on eBay in April.

“I found a 36-foot trailer that was all black, and I thought, ‘The Rosie’s logo would look really great on that,’” Barone said.

The truck is stainless steel inside and had a grill and other cooking equipment already built in. This made it easy for Barone and his crew to begin selling classic Rosie’s food right from the truck.

“We wanted to sell the most popular things from Rosie’s, so we are doing entrees like grilled lamb chops. Of course we are doing Hot Mama Bread, which is very, very popular in the restaurant and on the truck,” Barone said.

The Rolling Chef also offers fresh salads, including a Caprese salad and several kinds of Caesar salads along with toppings such as salmon or chicken. Two hot soups are available from the truck, including lobster bisque and beef and barley.

Just as much as Barone is concerned about the food choices, he is also intent on creating an atmosphere that is welcoming and fun for all the lunch patrons.

The setup around the food truck is like a park, he said. People sit on picnic tables and benches, and Rosie’s sets up small white bistro tables to make eating more convenient. The truck also plays music during lunch.

The truck has encouraged other businesses to set up stands or trucks near Levis Square, and the area has become more popular, Barone said.

“Food trucks have really stepped up their games,” he said. “It’s not just hot dogs and stuff anymore, but other food like what we are serving. Since we’ve been Downtown, we’ve had other trucks join us and it’s been quite exciting. It’s growing, and people are coming down to eat. It’s almost like a food court now.”

Amid the excitement, even Rosie herself — Barone’s mother  — found time to come visit and help out at The Rolling Chef.

“My mom, the original Rosie, came down on Wednesday, so people got to talk to Rosie. It was great,” Barone said. “She’s an amazing woman. She wanted to come over and help out any way she could. It was great to have her there to talk to the people.”

Barone said he is open to catering weddings, graduation parties and other events with the truck.

“I think it’s got a very bright future and someday we hope to have more than one food truck. We want to go out at night and also do some catering and festivals. The door is opening for us,” he said.

The response since the truck’s debut in early October has been overwhelmingly positive, Barone said.

For more information, visit www.rosiesitaliangrille.com or call the restaurant at (419) 866-5007.