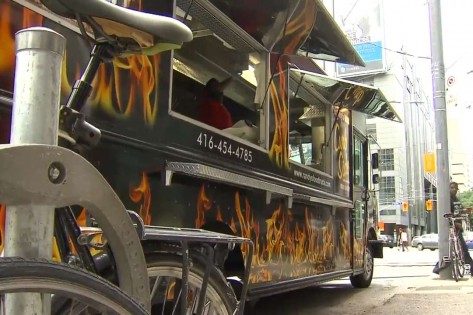 Toronto is getting its own Food Truck Alley thanks to the owners of The Feisty Jack and Tire Source.

The concept was inspired by Hamilton’s Food Truck Alley and was possible under the new food truck bylaw that Toronto city council passed in the spring, which now allows for vending on private lots.

The Food Truck Alley in Toronto will have two to three trucks at the parking lot from 11 a.m. to 3 p.m., Wednesdays to Fridays. The lot has room to accommodate six or more trucks, Randolph said.

If the concept takes off, the alley could open on weeknights and offer Friday night food truck parties, Randolph said.

“If the people want it then it’ll grow and get bigger,” he said.

The Feisty Truck, which offers British comfort food, and Pancho’s Bakery, which sells churros, will be at the lot on opening day.

Randolph said other vendors who’d like to offer their fares at the lot are welcome to apply here.