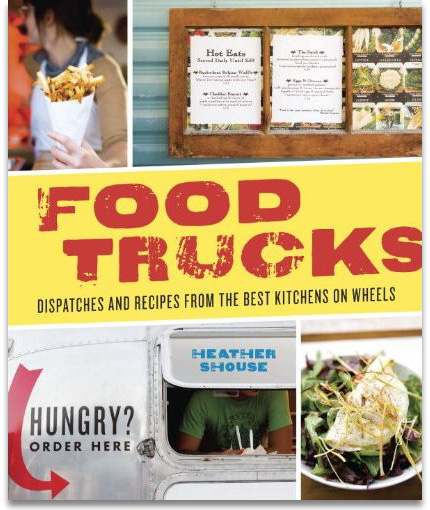 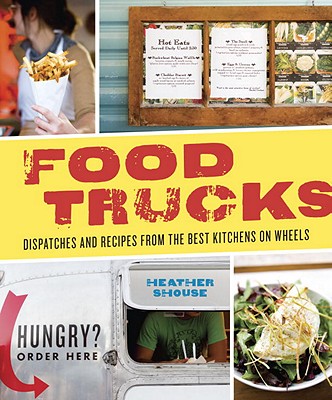 Heather Shouse traveled the country eating street food, all so you could know where to go next time you’re in the mood for street meat or Korean tacos or trailer-fried doughnuts. Her book, Food Trucks: Dispatches & Recipes from the Best Kitchens on Wheels, surveys the food truck culture in LA, Portland, Austin, New York, DC and other hot spots both well known and less so. Chicago is in there too, of course, with the acknowledgment that current regulations mean that most of our local trucks violate her own rule that all the trucks included in the book make their food on the truck. “Hopefully by the time you read this you can add these to that list,” she optimistically writes.

The book saw its official release Tuesday, and the regulations still stand. But the turnout for Shouse’s book signing and “food truck summit” at Goose Island’s Clybourn brewpub was strong despite the rain, and the enthusiasm for the clutch of trucks crowded into the parking lot showed that Chicago is ready whenever the City gets around to making it easier to eat curbside. The trucks were from 5411 Empanadas, Flirty Cupcakes, gaztro-wagon, Hummingbird Kitchen, Sweet Miss Giving’s, The Southern Mac, and Tamalli Space Charros — plus an unofficial truck from Ja’ Grill, who pulled up on the edge of the circle and, before the rain picked up, served jerk chicken, catfish and pork dinners for $8 — considerably more than the $3 limit all the others held their menus under. The rain may have pushed people inside to eat, but it didn’t stop the savory trucks from selling out within the first hour of business. Once inside, folks lined up to try Curbside saison-style beer, which Shouse brewed with Goose Island Clybourn’s head brewer, Jared Rouben, and queued up to get Shouse to sign a copy of her book. Several of the folks picking up copies were prepping trucks of their own, including Bridgeport Pasty and Taquero Fusion.

Food Trucks is part travel guide, part cookbook and part biography of a trend. Starting in the well-established food truck cities of Los Angeles, San Francisco and Oahu, Hawaii and spreading north and east from there, Shouse doesn’t try to create an exhaustive compendium of currently operating trucks (with an estimated 7,000 in LA alone, many unlicensed, that would be impossible). Rather, she spotlights standouts who are doing something unique and doing it well, and writes evocative profiles of the people behind these mobile eateries — who they are, where they come from and why they got into this business. Meanwhile, some of the best known trucks only merit a sidebar. I asked Shouse about that, and she said she felt it was important to focus on people who aren’t always in the spotlight.

“I did a small mention of Grill ‘Em All in this roundup of food trucks in LA, and they won ‘The Great Food Truck Race,’ but I felt like they got covered so much in the media and they were on TV,” she said. “And Nom Nom Truck, everybody knows about their banh mis. I’d be remiss not to mention their Twitter feeds, but everybody at all interested in food trucks has heard of them, so why should I tell the same story over and over? I really just give them their sidebar and spend some time talking about Antojitos Mi Abuelita, this woman making this crazy mole out of a truck that’s better than a mole you could have at home. She’s able to produce it daily on a truck, that’s just remarkable. Those stories are so much more compelling than the guys who are just like, ‘I dunno, I wasn’t doing anything, and my friend said I should do a truck.'”

The stories are entertaining enough to keep a reader interested page after page, and the sheer range of cuisines — and ways they’re being served — is just staggering. A Hawaiian operation with a custom flatbed truck capable of broiling dozens of chickens at once, who got started because the owner thought he could do better than the usual football team fundraisers. A gourmet restaurateur who built a custom pig-shaped truck in downtown Seattle in part so his employees would have good food options close by. A company helping immigrant cart vendors in DC offer something more interesting than hot dogs. The sous chef and sushi chef of a Beard Award-winning restaurant who set up a trailer behind an Austin dive bar to sell gourmet Asian food in their spare time. A woman in Kansas City whose herb garden was going to waste, so she started making fresh syrup for snow cones. Their stories are told in an engaging, energetic voice. The variety and Shouse’s eye for interesting details had me daydreaming about the possibilities here in Chicago — and taking notes for my next vacation.

Many of the profiles are accompanied by recipes. Shouse said that her intent was to make it worthwhile to foodies and culinary adventurers, but also for it to be a kitchen companion those playing along at home. “Not everybody’s going to be able to make it to LA to eat kimchi quesadillas, so it’d be kinda cool to make it in your house, or in the summertime and you wanna make this awesome barbecue from a truck in Philly. It’d be great for people who don’t have the ability to travel and find all these trucks, and it’s great for people to be able to say, ‘I made the famous whatever from Portland.'”

As the Chicago food truck scene heats up and a revised ordinance inches its way through City Council, Shouse shared some thoughts on what the burgeoning scene could learn from other cities. First, get organized and create a professional organization to help represent and advocate for the industry. “Matt Maroney has been really instrumental in helping the new trucks on the road and helping them navigate the laws in Chicago. I think taking it one step further and organize in terms of forming a food vendors alliance in Chicago, it would be really powerful. It would help their case in front of the City Council if they looked more organized and official.”

Second, vary their concepts. “In Portland that’s how they’re so successful. [Vendors] find one thing, and they do it really well, because they know that in LA, after Kogi, probably 50 trucks hit the street doing Korean tacos, and they all just blended together. If you can’t stand out from the crowd, if you’re not first or the best, then you need to find a new concept, because it’s just never going to work. You’re just going to get lost in the shuffle when it blows up.”