TRAVERSE CITY, MI — After stops in Kalamazoo, Detroit and Grand Rapids, the Great Food Truck Debate has now parked itself in Traverse City.

The northern Michigan city, fast becoming known around the country as a destination stop for foodies, is currently in the throes of a debate over mobile restaurants that has played out in numerous cities around the U.S. in recent years.

Although the debate takes on a unique flavor in each new locale, in Traverse City, as in other spots, the central question remains the same: How does a city strike a delicate balance between the established, property tax-paying brick-and-mortar restaurants and the surge of entrepreneurs with fully-loaded, mobile kitchens?

“We’re really trying to meld a policy around allowing the food truck thing to happen in Traverse City,” said Jim Carruthers, a city commissioner who is part of a special city ad-hoc committee designed to review locations, regulations and fees pertaining to food trucks in the city limits.

“All the studies we’re reading show diverse food options and opportunities for young people is only good for your community.”

Tracing its roots in the West Coast, the food truck revolution has finally reached northern Michigan, a place that may seem perpetually behind the times in some ways, but really no more so than its municipal neighbors to the south, which went through the great culinary debate mere months ago.

On Tuesday, Feb. 12, the city’s Downtown Development Authority is holding a special meeting to solicit opinion from business owners downtown. The city has asked the authority for input on the new mobile food vending ordinance drafting, and DDA officials say they are still in “information gathering” mode.

Bryan Crough, DDA director, said the authority has received a couple dozen emails from concerned parties, split evenly for and against relaxing regulations for food trucks. He indicated the DDA will likely sway with the wind of public and downtown business opinion at tonight’s meeting.

The Traverse City Area Chamber of Commerce staff indicated they were in a similar opinion-seeking mode and are surveying membership support this week.

In Traverse City, the debate has intensified since last summer, when the city updated a “peddlers” ordinance originally passed in 1994. The two main ingredients appear to be questions about exactly where food trucks can locate, and how much in city fees their operators must pay.

Discussions have orbited around whether to allow food trucks to set up on city-owned property a certain distance from open restaurants, as Kalamazoo officials approved in August, or limit them to private property for extended periods, as Grand Rapids officials did last June.

Fees have been a point of contention since last summer, when, on the DDA’s recommendation, the city doubled the daily fee for transient merchants during peak season from $50 to $100 throughout the entire city. The city later relaxed that fee outside of the downtown district after some confusion between the city and the DDA as to the intended boundaries of the new fee recommendation.

He has been vocal online, starting a TC Street Food Facebook page to advocate for food trucks, as well as an online Change.org petition that’s pushing for no location limits to food trucks on private property in the city.

Joseph, whose been a fixture outside the growing Right Brain Brewery, contends that food trucks pay substantial operating costs and says they also help create a vibrant downtown that benefits surrounding businesses by drawing foot traffic to the area.

“This debate would never happen if I opened a restaurant downtown right next to another one,” he said. “But when a food truck comes to town, we have an ‘unfair advantage.'”

The debate in Traverse City is unique, Joseph said, due to support for food trucks among brick-and-mortar restaurant owners like Eric Patterson of The Cook’s House.

He characterized the current fees structure as confusing and “somewhat protectionist.”

Still, “location is where the discussion has heated up.”

The location discussion includes questions like whether the city should allow food trucks to squat in city parks like the Open Space. Access to Lay Park along Union Street would give food trucks visibility in Midtown and the River’s Edge development, and the hundreds of nearby Hagerty Insurance office workers.

And what about Front Street? Downtown Traverse City is not a large place, but the heart of the district is Front Street, an upbeat one-way shopping spot that’s just south of the West Bay waterfront, where annual summer activities like the Cherry Festival and outdoor Film Festival screenings take place.

Crough said there appears to be support among property owners for allowing trucks to set up in parks, or adjacent to city parks, but opposition to trucks taking up city parking spaces along Front Street, home to numerous restaurants.

“I think the question being asked is, when we already have such a variety with 50-some downtown restaurants, do we really need to give up parking for food vending?”

With so much food already downtown, some have suggested locating food trucks in areas of the city that are “underserved,” but Carruthers indicated that kind of thinking potentially ignores a central need of food trucks. Namely, people.

For food trucks, “once you leave downtown, it’s difficult,” said Carruthers. “We don’t have a multi-block downtown.”

“They need to be in proximity to Front Street,” he said. “We all know that tourists don’t deviate from Front Street. Why locate the food trucks on the edges of town when the people aren’t there?”

Dave Denison, chef/owner of Amical, a popular upscale Mediterranean bistro-style restaurant next to the State Theatre, said he’s interested in seeing the city draft something that will “help promote food trucks as well as protect the interest of merchants who have made investments in private property.”

Denison is helping on the ad hoc committee, and said he’s a fan of food trucks and doesn’t really consider them direct competition because they are filling a different market niche than his 100-seat sit-down style restaurant.

However, he said, eateries like House of Doggs, a hot dog joint on Union Street, might feel differently if a food truck parked on the block, home to a cluster of bars.

“They would be a direct competition with some kind of unfair advantage.”

Denison said he considers the current mobile vendor fees too high, ostensibly designed to protect against sunglasses peddlers from setting up right in front of the souvenir shops. He’s in favor of a simple, $1,000 annual permit that’s good all year.

An annual fee, he argued, would remove gray areas from an enforcement perspective and separate “committed” local vendors like Roaming Harvest from those “coming up to skim the cream off the top” by only visiting Traverse City during the busy summer months.

But, “the food trucks want that to not be applicable to them.”

Denison pointed to a plan by recent Brooklyn transplants Gary and Alison Jonas to open a bar in the former Jack’s Market space at 448 East Front Street and open their parking lot all year as a hot spot for food trucks, in place of having a bar kitchen.

“I think that’s an awesome idea,” Denison said. “But I don’t know how that guy would feel if the city allowed a beer truck to pull up right across the street and sell beer for $2 less than he’s selling it.” 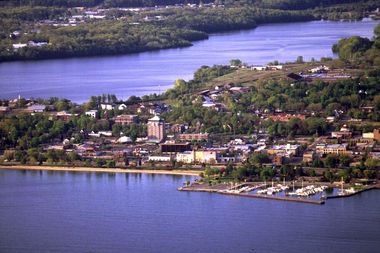 Looking at the big picture, Carruthers said the debate underscores the strides in growth and development Traverse City has made in the last decade.

Grand Traverse County’s population increased 12 percent between 2000 and 2010, and during that time the city gained a Frontier League baseball team, saw the reopening of classic venues like historic City Opera House and State Theatre downtown, gained a gleaming new culinary institute campus and has found adulation among famous faces like Michael Moore and Mario Batali.

“It’s growing pains and we have a very vocal and concerned community,” he said. “We all care so much about this town and its growth that sometimes we limit it, and I don’t think that’s what we want to do.”

Carruthers said the city wants to have an ordinance in place by this summer. Many others parts of the state, like Ann Arbor, he said, are watching.

“I’m sure we’re going to see this in Grand Haven, Ludington and all the beach communities along the Lake Michigan coast” sooner or later.