It was once a liquor store with a big parking lot on a quiet block. Today, Traverse City’s open-air bar and food truck park is becoming a bustling business incubator with Brooklyn flair.

The founder is Gary Jonas, the 35-year-old owner of the Little Fleet bar. He arrived from the trendy New York City borough and turned Jack’s Market three years ago into a hip hangout in a city increasingly filled with food-savvy empty-nesters and young people attracted to a breezier pace.

“Here, lifestyle is so important,” said Jonas, dressed in dark jeans, cuffs rolled up, and a fashionably wrinkled button-down. He still spends a few days every month in Brooklyn, looking after his businesses, including the Farm on Adderley.

Little Fleet attracted overflow crowds in the summer as tourists and locals alike chowed down on $9 Korean beef tacos with sambal slaw and sriracha mayo washed down with a Shrub Soda rhubarb-flavored pop. It’s a street-level gourmet experience curated by Jonas as food-truck landlord.

His Traverse outpost is one part of a larger regional food economy that has become a kind of favorite son of big-city celebrities, spawning new visitors and residents. Famed New York restaurateur and television host Mario Batali, who vacations in the area, has tweeted to nearly 880,000 followers about his love of the region’s locavore scene. One favorite: The Cooks’ House restaurant across the way from Little Fleet.

The local foodie movement is also an outgrowth of a local economic boom over the past decade and a half with more millionaires, retirees and big-city out-of-towners living year-round in the area with some even commuting by plane to East Coast jobs during the week in bigger cities. These new residents have gobbled up more effete fare and even more Brooklyn-style gritty panache.

A younger set of professionals are looking for the same thing and can get a little piece of the local food scene at a lower price from the side of a truck. Last year, Carter Oosterhouse, who has hosted a variety of lifestyle television shows, returned home to open a winery, Bonobo, with his brother.

Jobs in the region’s food-processing micro-businesses, for example, are projected to grow at a rate of 16% through 2020, according to the regional economic development group Networks Northwest. That’s 10 times the projected rate of national growth in the sector over this same time period.

Food carts were once essentially verboten in this resort city where dozens of restaurants vie for tourists and residents’ attention. But since the city dropped the barriers, licenses grew by almost 50% to 16 so far this year from 11 in 2013.

“There was a fear from restaurants,” Jonas said, that food trucks would steal customers. Instead, he said their presence has helped, bringing more people to a corner of downtown Traverse little trafficked by many tourists.

His operation in Traverse now hosts five summer food trucks at a time parked in a lot along East Front Street next to picnic tables under a pergola. The operation includes a trailer wheeled inside during the off-season through his airy bar’s large garage doors.

Inside, a large screen fills one wall to show movies while other walls featured hand-drawn, cartoon-like art. The vibe is homey, but the menu sophisticated. A Stone Cali-Belgique IPA beer sells for $7 a pop.

Jonas said he started small, setting up his own 1972 Fleetwing trailer, dubbed EZ Cheezy, in the former parking lot in front of his bar (Hint: it serves up grilled cheese) because he feared he wouldn’t be able to attract others. He didn’t need to. He had five trucks the first summer. and the waiting list to get in now is as many as 20 trucks. 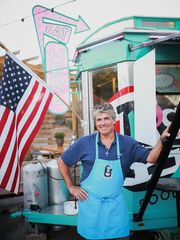 The park outside the bar serves as a popular picnic ground now for those seeking out a smorgasbord of international flavors from Portuguese to vegan fare.

But Jonas goes beyond serving as a truck’s landlord. When the weather turns cold and the trucks head out for the season in mid-October, he invites passionate chefs to take over the pale-yellow EZ Cheezy trailer inside the bar for a month at a time.

Andrea Deibler’s Snap — a sausage-centric pop-up food cart using local products — opens this December. The 33-year-old Deibler moved to Traverse City with her husband, a native of the area, a year ago after working as the in-house butcher at farm to table restaurants in Chicago. The couple met in Chicago.

“We wanted to live in a smaller community that really embraced local farms and food and an outdoor lifestyle, something we were kind of lacking in Chicago,” she said. 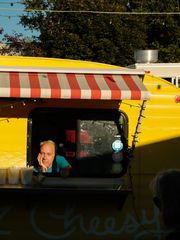 Deibler said she believes the local food movement is planting deep roots. “As more folks want to know where their meat comes from, the more they value the craft of whole animal butchery in their homes and at their restaurants,” she said

Part of Jonas’ business model offers a low-cost testbed for culinary entrepreneurs to bring their ideas to market. Eric Kolden, 36, started an LTO — limited time only — venture using Jonas’ indoor trailer at Little Fleet last year and then moved his Japanese food cart White on Rice outside this year for the summer season. Now he’s scouting locations for his own brick-and-mortar spot in downtown.

“Traverse City is a lot more cosmopolitan than I think people believe,” said Kolden, who grew up in the area and moved to Cincinnati before returning home.