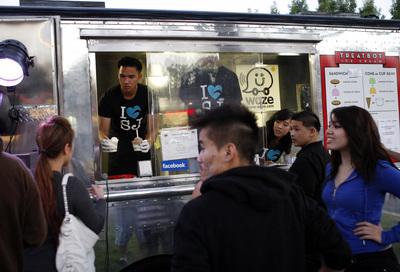 It can be hard out there for a food truck entrepreneur.

As recently as a couple of years ago, all you had to do was slap some slightly exotic food onto a tortilla (Korean short ribs, Cajun crawfish, Italian meatballs!), cruise around the downtown of any decent-sized U.S. city until you found a place to park, send out an e-mail blast with your location, and poof! You had a trendy and thriving business.

These days, with every Tom, Dick and Jean-Georges in the culinary world jumping onto the food truck bandwagon, it takes a little something extra to get noticed.

Leave it to somebody in Silicon Valley to find a way to use technology to stand out in the food truck game. In this case, by combining a food truck with “… wait for it “… karaoke!

It’s called Treatbot. It serves gourmet ice cream and has a flat-screen TV attached to a karaoke machine mounted on the outside.

And the karaoke machine’s not just for decoration. If you can score 90 or above you win free ice cream.

The ice cream is $3 for a cup or cone and $4 for an ice cream cookie sandwich, and there is a variety of rotating flavors. The cups or cones come with two healthy scoops, making their prices very competitive with your chain ice cream shops, especially the ones that use the frozen slab of rock.

My number one recommendation is the East Side Horchata. It’s delicious, creamy with a vivid cinnamon flavor and just a hint of vanilla.

If you’ve been afraid of trying Horchata as a beverage, this is a good baby step. Just think of it as a rich vanilla ice cream with cinnamon flavor. If Treatbot has snickerdoodle cookies when you visit, definitely go for the horchata-snickerdoodle sandwich. The flavors blend perfectly, and the cookies are soft but keep their structure all the way to the last bite.

Treatbot’s Great Pumpkin ice cream tastes like frozen filling from the best homemade pumpkin pie. You know, the kind that has the hand-grated nutmeg instead of the stuff that’s been in the spice rack since your grandmother bought it decades ago.

There is one downside to Treatbot (well, two if you count the standard karaoke tragedy of some drunken idiot butchering a Van Morrison song). Because it’s a truck there is only have a limited supply of every flavor.

For example: Despite multiple visits I have never gotten there in time to try the 408. According to numerous Treatbot Facebook fans, it’s the best flavor, a concoction of caramel, fudge and Oreo cookies. Personally, I think it’s a 21st-century urban myth — like Happy Hours that feature microbrews for a dollar.

Treatbot also offers root beer floats that are apparently very popular because once again I’ve never gotten to a Treatbot location in time to have one.

The bottom line is Treatbot is well worth seeking out for some unique and tasty ice cream flavors. However, if they say they’re are going to be at a location at a particular time, my advice is get there as close to the opening time as possible to get the best choice of flavors.

One note: Earlier this month Treatbot posted that it would be shutting down until the beginning of the year but then several days later sent out a tweet saying it would be operating that night. So there appears to be a lot of flexibility in the schedule. My advice is to regularly check the status online.