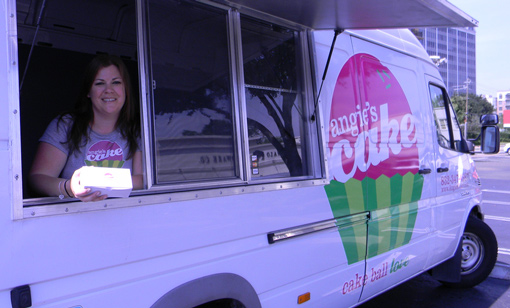 Angie Jackson started her business, Angie’s Cake, in 2008. It all began while she was marketing real estate. As at many offices, Jackson exchanged recipes with her co-workers. During one exchange, she received a recipe for cake balls. Soon after, she spotted another recipe for cake balls in the newspaper, but it wasn’t until Jackson became addicted to a baking blog that the idea of making cake balls her business bloomed.

She spent the next two years juggling a fledgling business with her full-time job, then, as she puts it, “the fun part of my life took over.”

Jackson finds baking therapeutic. She and her husband, Marty, added the truck in 2011.

Jackson’s cake balls are slightly larger than ping pong balls. Each has a firm, exterior icing that is usually made of chocolate, making it the treats the perfect cross between a cake and a piece of candy. This firm outer layer covers a soft and chewy cake interior.

The cake balls are incredibly tasty and you’ll be hard pressed to stop eating them. Each one is individually decorated with sprinkles, nuts, coconut or drizzles of icing. (Jackson also makes cake pops, which basically are cake balls on a lollipop stick.)

I tried a six-cake ball sampler, which comes in an elegant box. The sampler included six of Jackson’s most popular flavors: Ginger Beer, Vanilla, Birthday Cake, Lemon, Chocolate and German Chocolate. Seventeen flavors are featured on Jackson’s website. If you have a favorite cake that is not listed, I’m betting that Jackson can figure out how to make it into a delectable cake ball.

The thing I like about cake balls is that they’re the perfect size for a snack. I find cupcakes larger than I need when I just feel like something sweet. The only problem is, it’s hard to eat just one.

Jackson also makes brownies. The one I tried was rich and had a robust chocolate flavor without being cloyingly sweet. It also had lots of nuts, adding to the texture and flavor.

Jackson can be found at various events around the city and will soon be taking her truck to the streets on a more regular basis.

Paul Galvani is the author of the upcoming guide Houston’s Top 100 Food Trucks.