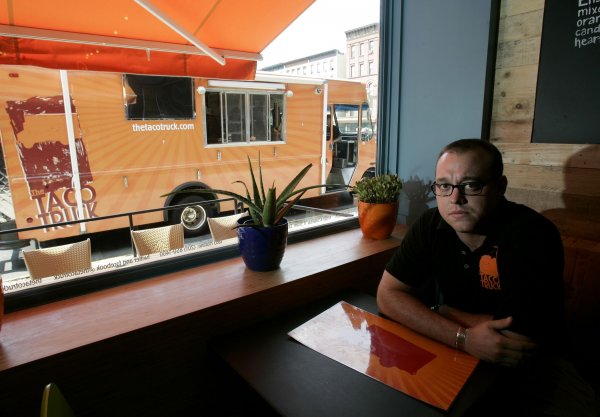 It’s a familiar site in Midtown Manhattan: harried and hungry bankers, ad execs and all other manner of office workers, seeking an alternative to the typical deli meal, line up outside their favorite mobile lunch spot.

Until one sad day, the spot is empty.

While consumers are hot on food trucks, law enforcement is hot on their tails — with tickets and tows. Now, Mayor Michael Bloomberg wants to enlist these four-wheeled eateries in the same grading system used for the city’s restaurants. Health officials are not opposed to the idea, but said it might be difficult to track down the city’s mobile food vendors.

Meals on wheels…But who knows for how long? New Yorkers have been selling food on the street since the first wave of immigrants flocked to the Lower East Side more than a century ago.  But “tricked out” trucks that serve gourmet meals and tweet their whereabouts to hungry followers are a relatively new way to satiate New York’s appetite for street food. (Check out New York Magazine’s top 25 food trucks).

The problem is that the myriad regulations and licensing restrictions governing mobile food vendors makes it difficult to do business. The vendors are barred from large swaths of the city (see the full list here), and the Health Department limits permits to about 3,000. The waiting list for them can run up to 10 years. The city’s cap has forced some mobile vendors to rent, borrow or even obtain a permit on the black market, the Wall Street Journal reported.

Food trucks are under even more pressure now after a court decision made it illegal for them to set up shop in metered parking spots. Some vendors said they spend so many years cultivating customers in one location that moving to a new spot is a huge blow to business.

So will New York’s food trucks be homeless?

Power in Numbers: Food truck vendors have banded together to form the New York City Food Truck Association, which represents 37 drivers. The group recently made a deal with the Rockrose Development Corporation to open the city’s first designated area for food truck vendors on private property, where five food trucks will have a permanent home in a parking lot in Long Island City, Queens. Vendors will include Rickshaw Dumpling, the Treats Truck and Frites ‘N Meats, among others, according to the New York Times.

Food truck drivers recently told DNAinfo that what’s really needed is, “a real solution that balances the needs of the growing industry with building owners and other local businesses who often see the trucks as competition.”

Can New York learn from its food-truck breeding brethren? Here’s how other cities are dealing: