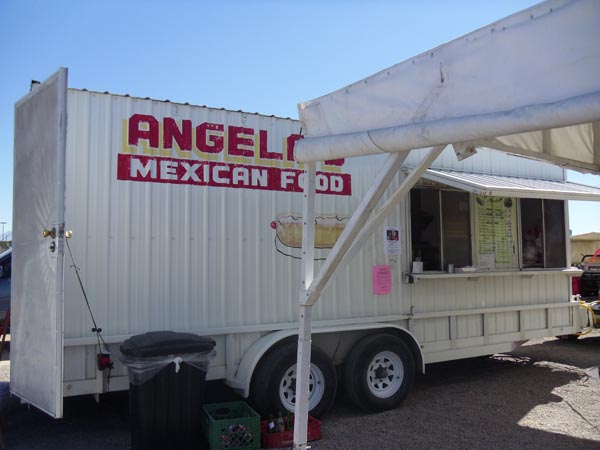 Driving past the Northwest corner of Prince Road and Stone Avenue, you can’t miss Angela’s food truck. Serving the community for eight years this truck attracts a mixed crowd of hungry people.

Maria Negvete, the owner of Angela’s and her sister, Rosario Delgado prepare a wide variety of Mexican dishes for the dozens of customers they attend to on a daily basis. The menu ranges anywhere from Mexican hotdogs to red chili burritos, tacos to caramelos and carne asada to adobada (pork marinated in a red chili sauce).

Negvete said, the “quesadillas which you can have with or without beans, whichever you prefer, and the caramelos,” are her favorite.

Negvete named the food truck after her daughter. The family is from Nogales and when asked about the origin of the recipes she smiled and said, “I don’t know, they’re Mexican.”

The truck, which stands in a pebble parking lot, has tables under a white plastic canopy which faces the busy intersection.

Customers place their orders at the window where Negvete and Delgado have it ready very quickly.

Once an ice cream truck, Negvete and her family converted the truck into a popular Mexican food stop. In the beginning Negvete failed to have proper license’s for her food truck.

“The police came and told me to get out so I found (the) owner and paid him $300 a month to stay on his property.”

Today, Angela’s has a state license, city license and health department license in order to remain open and stay in business. Angela’s is open from 9 a.m. until 6 p.m. Monday through Friday. Prices vary from $1.50 to $5.60 on the menu.

Negvete’s husband, Alex, hangs around part-time to help his wife out. “Sometimes I have to refill the propane tanks.”