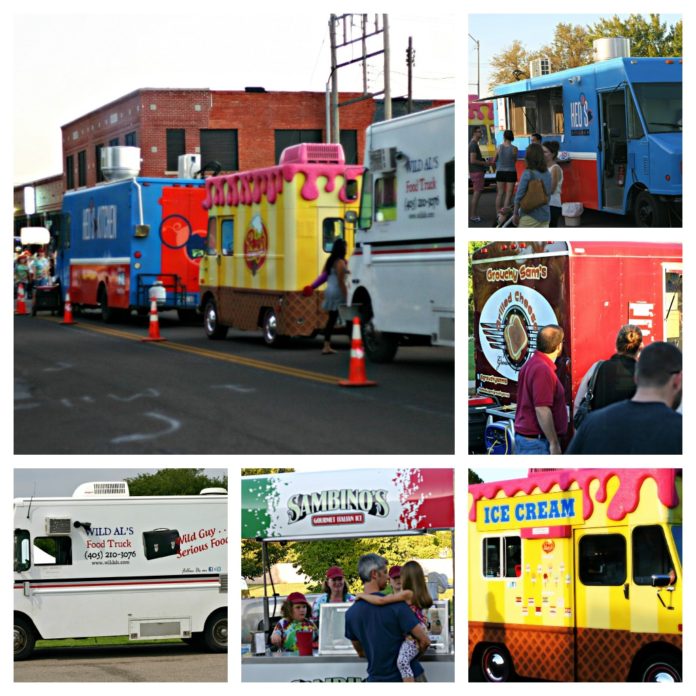 The regulars approach the gaping window of the truck-turned-traveling kitchen and order with confidence.

But the curious first-timers linger back a few feet, close enough to read the menu, yet far enough to avoid immediate contact. “I didn’t even know this was here,” they say, while looking at the food truck like it’s an alien space craft.

Yes, food trucks have landed in Tulsa. And there are signs of a growing invasion.

Local restaurant veterans Lola Palazzo and Teri Fermo have joined the food truck phenomenon, dishing out their upscale offerings. Andolini’s Pizzeria will hit the streets with its truck in the fall.

“I think it’s easier to convince people to eat out at food trucks here than it used to be,” said Mitch Neely, owner of the Grub Truck and organizer of the upcoming festival. “My goal is to serve good food to people so it does not really matter if they are eating out of food truck or not.”

A city database shows 86 mobile food preparation trucks in Tulsa, according to Jeffrey Bollinger, licensing and revenue processing manger for the city.

About one-third of the trucks are mobile extensions of restaurants such as Billy Sims BBQ, Brownie’s hamburgers and Subway sandwiches, the database shows. The remainder are the more traditional free-roaming food trucks – a trend that started, in Tulsa, with taco vendors.

The Tulsa Health Department inspects the trucks, and the city licenses them and collects the revenue from the $145 annual fee that’s shared with the county, he said.

It was Tulsa’s first step toward becoming a food truck-friendly city.

Other cities – like Chicago – continue to try to find a balance with the established brick-and-mortar restaurants. The trucks can operate there, but chefs can’t cook and prepare food onboard.

Meanwhile, food trucks are flourishing in places like Austin, California and the Pacific northwest.

Country music filled the air around Teri Fermo’s purple custom-painted food truck, Jezebel, when Judy Driesel walked up to order. It was just after noon in downtown Tulsa, and Driesel was craving some of Fermo’s international cuisine with Latin, Asian and French influences.

“Normally I don’t eat at these places,” said Driesel, who works nearby. “But I come here at least once a week. I am excited. I wish she had a permanent place here. Her food is awesome.”

Fermo, owner of Bohemia, Movable Feast Caters, sharpened her chef skills at the Culinary Institute of America. Watching Fermo work with several cooktop burners blazing in Jezebel’s kitchen is like having a seat at the chef’s table in a trendy restaurant – without the seat.

“Every time I put on Motown, people flock,” Fermo said, adding that she also cooks to Latin music and “old-school jazz.”

Last year, Fermo moved to Norman with the hopes that feeding the hungry fans at football games would make food trucks as popular there as they are in Austin, another college town.

“On game day, we sat for 10 hours and made $139. It did not even cover the gas,” Fermo said. “That was a rude awakening. And we were right there a block from the stadium.”

In contrast, Fermo does quite well at the Cherry Street Farmers Market on Saturday mornings. That’s where she catches up with the clientele she’s cultivated in 20 years of restaurant business in Tulsa.

Her food is catching on downtown, where a steady stream of customers have found her on Third Street near Boston Avenue about two days a week. Some of her specialties include sweet potato fries with Parmesan cheese and truffle oil, Drambuie-marinated brisket tacos, and fried grilled cheese.

“With food trucks, everybody does it. They buy one thinking they are going to make a million, but there are so many things that you have got to do,” Fermo said. “We have been going downtown for three months now, and it just started taking off.

“You can’t just go somewhere a couple of times and expect people to flock. If you say you are going to be there, be there.”

From her experience, she thinks Tulsa is more food truck-friendly than Cleveland County, where they had more restrictions and requirements. But she also understands the need for communities to regulate this new food frontier.

“I don’t think that they knew what to do before,” Fermo said. “It wasn’t established. It was something new.”

‘Easier to find us’

Mitch Neely’s Grub Truck is one of the newcomers to Tulsa’s food truck scene. When he is not dishing out chorizo tacos, Champagne onion rings and linguine mac, Neely has taken a leading role to encourage the growing food truck community.

Neely is organizing the food truck festival at the Tulsa Air and Space Museum on Sept. 29-30. He also administers the Tulsa Food Truck Facebook page, a place where he hopes trucks can connect with one another and their customers.

“What is one more thing on my plate if it helps my business?” he said. “I just hope that it attracts more and more people and they are looking at it and know what is out there.”

At this stage, Tulsa’s food truckers seem to be pulling together for the common goal, he said. Suggested gatherings, such as the festival or a rumored food truck court, have been well-received.

“So far, everyone has been pretty cool. Some have the mentality that if you get everyone in one spot, people will know where we are and it is easier to find us,” Neely said. Yet there are still challenges, he said.

“That is the only really negative thing I have come across, is some people wish there was more public parking for food trucks,” Neely said.

In cities where food trucks flourish, they have portal kitchens, Neely explained. They’re sort of like the mother ships where the food trucks go after hours for maintenance, cleaning and restocking.

“The food trucks come and pay rent and store their stuff there, wash dishes things like that,” Neely said. By law, the trucks must have a commissary kitchen for these purposes, but a centralized location would be helpful, he said.

‘Starting to come around’

Tiffany Poe plans to premiere her new food truck at the festival in September, yet it’s hard to imagine how the busy Pawhuska mother of three can squeeze another project into her schedule.

Poe owns her own food consulting and styling company, Tiffany Poe Culinary Services, with clients that include The Pioneer Woman, Food Network and Food Network Magazine. She just opened the historic Grandview Inn Bed and Breakfast in Pawhuska. And she’ll be writing a family-focused food column for the Tulsa World on Mondays, starting in September.

But, like many caterers, she looks at the food truck as a way to simplify her schedule.

“We do a lot of catering for the foods sets and for the Food Network crews,” Poe said. “So we thought that if we had a food truck our lives would be a whole lot easier.”

And her partner in the enterprise wants to cater to the late-night crowds at entertainment districts, providing Poe’s food that is influenced by French, Mediterranean and Vietnamese cooking.

Poe’s long-term goal is to bring a true, “pop-up” restaurant to Tulsa via food truck.

First and foremost, Poe considers herself an educator, having been a former chef instructor, most recently at Platt College. And it’s education that’s needed to draw customers to the trucks.

“Out in Los Angeles, there are food trucks on every corner from sushi to crepes, you name it,” Poe said. “And Oklahoma is often about 10 years behind. It takes some breaking out of the comfort zone, but people are starting to come around.”

Here’s how to follow some of the food truck vendors we talked to.

We want to know about your favorite food truck.

Where: Tulsa Air and Space Museum

For more information on the event or Tulsa’s food trucks scene, go to tulsaworld.com/foodtrucks