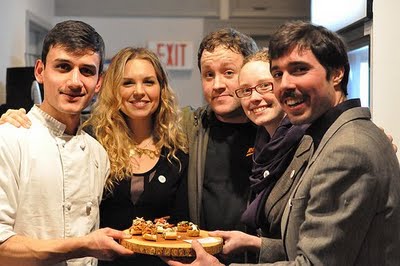 Ed. – We’re huge fans of Re Up BBQ, both for the great sandwiches they offer and because they’re just really nice folks. We asked them for a behind-the-scenes account of what it’s really like to operate a food cart: here you go. 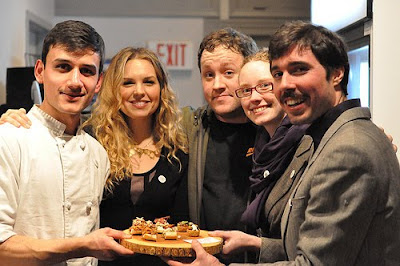 Michael Kaisaris, Lindsay Ferguson and Chester Carey, with three weeks to create and open the business, teamed up to serve authentic Southern BBQ at the Vancouver Art Gallery as part of the City of Vancouver’s street food pilot program. The Re-Up BBQ was born.

Buzz was instantaneous and soon the three found it too much to handle. Jose Rosales- Lopez and Briana Buckmaster flew in to help with the round-the-clock parenting. In a too-small “apartment”, pulled pork, coleslaw and sweet tea were furiously prepared overnight before the cart (affectionately nicknamed Agnes) was dropped off at the Vancouver Art Gallery for day care with Michael and Briana.

In the heady, early days of the Re-Up BBQ, all the parents took turns sleeping at the kitchen, babysitting both the slowly smoking meat and “Agnes.” After one month, the howling infant was demanding a metric ton of locally raised, natural pork every two weeks. Re-Up had created a monster! But, this behemoth was the most popular sandwich on the streets of Vancouver, and the crew had to keep up with demand. Lindsay, while balancing a full time job, went out to look for a bigger home. She found one, and at the end of October, the Re-Up moved Agnes into the kitchen of the former Wild Coyote Nightclub down on South West Marine Dr. Now, with space and a yard to play in, the team could breathe a little easier. 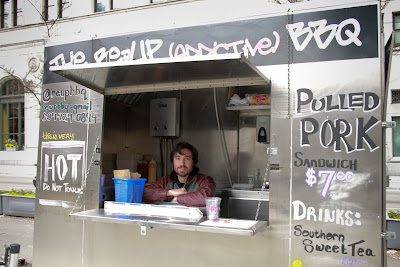 November hit like the Terrible Twos. Temperatures dropped to -12oc. It rained; it snowed; it hailed; it rained again. The beautiful, Portugese buns from Calabria bakery (delivered fresh to the kitchen) froze on site. Where did all the customers go? Everything — the buns, the napkins, the staff — was wet all the time. Only those most dedicated to their lunch would venture out of their offices for the Re-Up’s signature pulled pork. Not even the promise of a ½ rack of ribs would entice the bankers, lawyers and executives of the summer past. One cold day, Agnes threw a typhoon of a tantrum and burst her water pipes. Michael pulled an all-nighter, emergency surgery plumbing session, outside in -50c. Chester yelled at Michael yelled at Lindsay yelled at Jose yelled at Briana. They were ready to snap. The Re-Up crew knew they had to do something, something big to provide for their poor baby, Agnes. 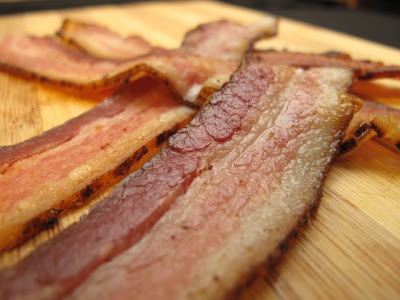 In the depths of dispair, they made bacon.

They brined the bacon in ancho, bourbon and beer. They smoked it in pecan wood.

And, they brined and smoked local turkeys for Christmas dinner. They sold them fresh from the food cart, as the weather continued to deteriorate. Vancouver couldn’t get enough! Agnes was finally going through a growth spurt. She was starting to provide for herself and the parents breathed a little easier.

Chester could go back to work and his passion: beer. Lindsay put her career on hold to focus on parenting the food cart and Michael found time to travel for a month. Good thing too, because the crew found out in early April that they were expecting a sister for “Agnes.”

The due-date for “Susan” — Re-Up’s Beef Brisket and Chili cart — is May 17th, 2011. She’ll be found playing near Agnes in the middle of Robson Square. Agnes will continue to serve Pulled Pork Sandwiches, and Re-Up is proud to report that their house-smoked bacon will be available daily at both carts.

The crew will be adding some extra-curricular activities to “Agnes’s” schedule this summer, so look for her as they let her free-range around the city stopping to sell sandwiches and bacon on the West-Side and in East Van. Also, she’ll be teaming up with legions, pubs and beer stores to offer dinner and drinks as soon as she is of age.

Michael, Lindsay, Chester, Jose and Briana are so grateful for the opportunity to become parents together, and hope their kids grow up to be a great and ever-evolving addition to Vancouver’s dining scene.

Post Script: The whole family is still very much together. You can often find them all in one place enjoying cask ales at any of the many CAMRA cask nights around the city. If they’re not there, they’re probably at the bar at l’Abbatoir chatting over cocktails and a bottle of Rippon Riesling.