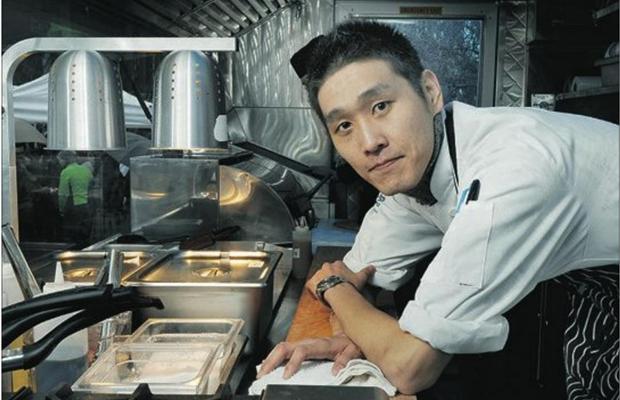 I’ve been meaning to try Coma Food Truck since it opened. I was invited for the opening, but unfortunately I didn’t have time to check it out until now. With @DennisPang‘s last minute organization for a foodie get together, and an extended invitation from the chef and owner of Coma, I finally made it! It’s so embarrassing it took so long, but all that matters is that I made it. I actually like trying places after they open anyways because the menu often changes and recipes and prices are still getting tweaked, so I find later experiences more representable. That’s not my reason for postponing my visit though. So why Coma? At first I thought it was referring to food coma, which I’ve experience all too many times, but I’m actually way off track. The “Co” is for “Korean” (yeah that’s a confusing one), then the “m” is for Mexican and the “a” is for American. It’s a fusion or words which represent the food and flavours at Coma Food Truck.

Fusion. It’s a popular concept in Vancouver, but so few so restaurants can do it right. Quite often our concept of “fusion” is actually just a switch up of ingredients rather than fusing the techniques of two cuisines together. To be fair, I’m not going to get that technical at a food cart, but I do find a lot of the offerings Mexican items, but made with Korean ingredients (switch up).

Personally I’m not a huge fan of any Asian fusion except for Japanese, just because I usually find any other attempts at Asian fusion overpriced and under delivered. However keeping an open mind and knowing what to expect, I was looking forward to Coma Food Truck and its Korean-Mexican-American menu. I was anticipating everything to be fusion, so I was surprised to see a couple very traditional Korean items. I was told by chef, who is formally trained in French cooking, that his mother actually helps him out with the Korean side of things since it’s not his specialty. I actually really respect that because it just shows that extra effort of trying to bring traditional Korean flavours to a presumed non-Korean clientele.

I didn’t have much expectations for the food, but when I go to food carts, I’m a lot less picky and I look at it more from a portion and value perspective. Of course flavour has to be there, but when I’m going for street food, I go in with a different mind set. With that being said his biodegradable products and 15% off offer for bringing your own plate didn’t go unnoticed.

I found the prices generally fair and the portions generous, and it’s a respectable attempt to popularize Korean cuisine without “dumbing it down” too much. At times I did feel it was a bit repetitive with “mix and match” ingredients, and I did get lost in the concept of whether it was more traditional Korean of Korean fusion. Some of the Korean-Mexican food just seemed a bit Mexican to me, although nothing I had was bad.

As for the Korean items, I found it was more finely executed and there was more to show off, but I was perhaps more satisfied with the heartiness of the fusion stuff. It was definitely more on the sweeter side compared to most authentic Korean food, which is perhaps even tangier and spicier than this was, but it was still good. I use the word “authentic” lightly, but if something is called “authentic” I will compare it to authentic. Oh and just a side note, but Korean food is spicy and quite garlicky, so be prepared with your mints.