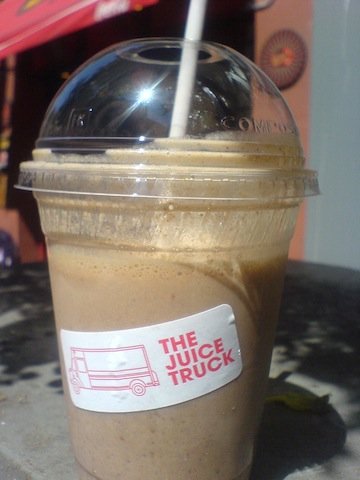 The Juice Truck, recently started operating as a street vendor in Gastown (at Water and Abbott Sts.) I tried the “Almost Chocolate” with banana, medjool dates, almond butter, raw cacao and soy milk on the weekend and enjoyed it.

I’m all for the smoothies, especially after interviewing Brendan Brazier earlier today. He’s got some enlightening stats and information in his new book Whole Foods To Thrive and here’s one that stands out:

Over a year, a big North American breakfast of two eggs, two slices of bacon, two sausages, a slice of toast, 5.3 ounces of hash browns requires 2.9 pounds of carbon dioxide emissions to produce, from start to finish. A lighter breakfast of 1/2 cup cereal, a cup of milk, a cup of yogurt and half a banana produces 12.3 ounces of CO 2. But a nutritious protein smoothie of 2.3 ounces of hemp protein, yellow pea protein, brown rice protein, flaxseed, maca and chlorella and that adds up to a more acceptable 1.2 ounces of CO 2 emissions.

If one person switched from the big N.A. breakfast to a protein smoothie, the C0 2 equivalent savings would be like driving a mid-sized car from Vancouver to Tijuana, Mexico, Brazier says.