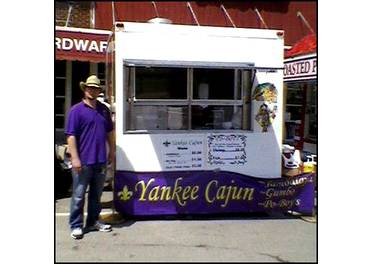 After about four months of operating out of a North High Street parking lot a few blocks south of Henderson Road, the popular Yerba Buena food truck packed up and moved to a new location on Indianola Avenue.

Owner Carlos Gutierrez said the move was due to a combination of complaints that drew the attention of Clintonville and Columbus officials, and property owner Fifth-Third bank’s desire to develop the space.

“I was asked to move by Fifth-Third,” he said.

“The city was just following up on some complaints.”

After city officials followed up on the complaints, Gutierrez moved his operation to 4490 Indianola Ave., where he serves food from noon to 8 p.m. Mondays through Saturdays.

Despite the complaints — and no matter their source — Gutierrez is determined to keep Yerba Buena, which specializes in Venezuelan food, operating in Clintonville.

“I like the neighborhood and I don’t like people to tell me what to do,” he said.

“If people didn’t like me, then my sales wouldn’t be what they are. Here in America, people let you know very quickly when they like you.”

He said the lines at his food truck are evidence his food is well-liked in Clintonville. A Facebook page for the business also has 758 followers.

“I just think part of it is because of Clintonville’s lack of restaurants and places to eat,” adding that Clintonville residents “are open and willing to try new things.”

Many of Gutierrez’s patrons at his restaurant hail from Clintonville. When he decided to buy the 30-foot food truck, he surveyed his Facebook fans on where to place the cart, many Clintonville residents suggested their own neighborhood.

Paul Borkoski, owner of Yankee Cajun — a food truck located at the corner of Crestview Road and Indianola Avenue — also said Clintonville is great place for food trucks because of the residents.

“The demographic here is diverse and there’s a range of people here that might try something different,” he said.

“I have my own uniqueness to my food and I think this is an area where people might actually try something different other than your typical meat-and-potato places.”

After operating in the same location since April, Borkoski has dealt with no ordinance or zoning violations from the city, he said.

Neither has Angela Theado, who owns The Coop — located at the corner of Indianola Avenue and Cliffside Drive.

Opened since the beginning of September, she said people seem to appreciate food carts in Clintonville.

“I think the community really likes them and supports them. It’s unique and you don’t have to have a building to have a restaurant and feed people — which is probably the nicest thing you can do is cook someone a meal,” she said.

Other established food trucks in Clintonville include Boston Bert’s Seafood, on Indianola, and one of the most popular mobile food units in Central Ohio: Ray Ray’s Hog Pit, at North High and Pacemont.

Gutierrez said he’s glad more food trucks are popping up in Clintonville, but he wishes that codes would be enforced evenly across the city.

Food trucks not only provide a service to the community, they also make more people interested in food, Gutierrez said.

Borkoski said that food trucks are unique because customers are actually dealing with both the owner and executive chef.

“The No. 1 thing is that you’re actually dealing with someone that cares about your experience and how you want your food cooked and how you like it,” he said.

“The demographic here is diverse and there’s a range of people here that might try something different.”