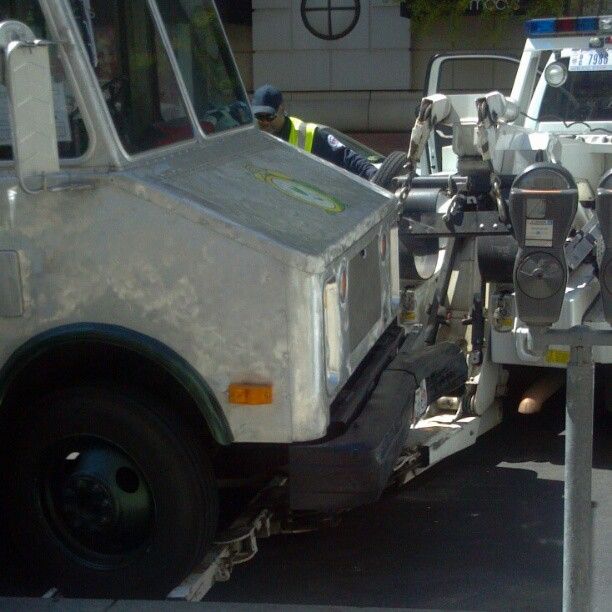 Fans of the Basil Thyme food truck got quite the shock earlier this afternoon when the mobile eatery was towed from its perch outside Metro Center. A reader wrote to DCist that the truck, which specializes in Italian dishes, was lined up on 12th Street NW between G and H—where many food trucks are stationed during the lunch hour—when several tow trucks and other parking enforcement vehicles arrived.

A Twitter user on the scene snagged the above photo of the Basil Thyme truck being hauled onto a flatbed before it was towed away.

Brian Farrell, who operates Basil Thyme, said he was told he owed the city about $1,000 in outstanding parking tickets, most of which were incurred from extended stays in parking-meter spaces. Food trucks in D.C. have long had trouble with parking enforcement in this respect—though operators presumably replenish the meters while they are parked and open for business, though under existing regulations, trucks are required to move along when no one is in line.

Farrell said in an interview that parking officials placed a Denver boot on his truck shortly after he opened at 11:30 a.m., but that he was allowed to continue serving for most of the lunch rush. Farrell said he offered to pay his outstanding fines on the spot, but was rebuffed. Tow trucks arrived about 1:15 p.m., he said, and he was forced to shut off his mobile kitchen, which is full of equipment he said is not suited to be tilted back and lifted onto a tow truck. The generators that power Basil Thyme’s kitchen are valued at about $7,000, Farrell said, and he can ill-afford to see them damaged.

“That’s my livelihood,” he said.

Sandra Panetta, owner of the Sweetbites dessert truck, was down the block when Basil Thyme was towed today. In a phone interview, she clarified that despite reader reports, she was not towed as well, though it has happened to her in the past when she accrued $1,400 in outstanding tickets, a sum that was difficult to pay.

“Hard to keep up,” Panetta said. She added that even though she, like other truck operators, keep the meters fed while slinging lunches and treats for on-the-go diners, District parking enforcement sometimes gets a bit too aggressive. Panetta, between sales of her truck’s lemon bars, cited a recent incident in which she was pulling away from the curb and was slapped with an expired-meter ticket.

But food truck operators are banking on many of their parking troubles being alleviated by recently proposed regulations regarding their burgeoning industry. Under the new guidelines floated earlier this year, most trucks would be permitted to remain in place for as long as their parking is paid for. But that applies only to mobile restaurants with savory menus. Dessert trucks like Panetta’s would be allowed to idle for up to 10 minutes with no customers present before being required to move along.

Meanwhile, Farrell, reached at the District’s impound lot in Anacostia where he was awaiting the return of the Basil Thyme truck, tried to remain upbeat by touting some recent accolades. Basil Thyme, with its freshly prepared lasagnas and house-made ricotta, was named as City Paper readers’ second-favorite food truck, while it currently holds one of the top spots from Yelp users.

Still, the number of parking tickets he’s received—29—was enough to keep him miffed with the city’s current approach toward food trucks. “Makes me sick,” he said.