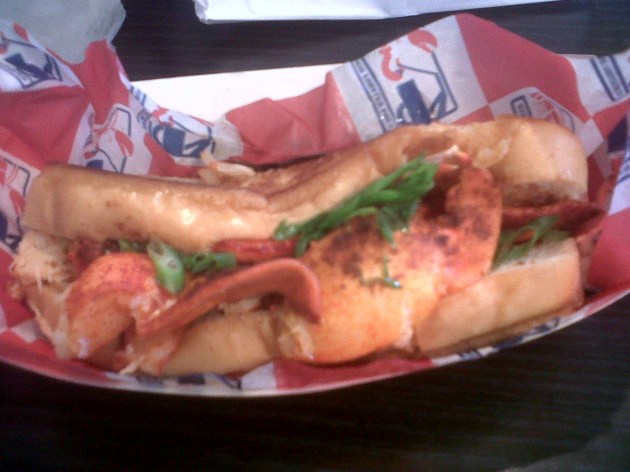 Today was finally the day to splurge on that infamous $16 lobster roll. After walking by Red Hook Lobster in Midtown near Desi Food Truck and the new Thai Food Cart enough times, the line was short enough and my wallet was full enough to order a Connecticut style lobster roll. The Maine style is described as lobster in mayo served on a hotdog bun split top-side, while the Connecticut roll is lobster served on a buttered and toasted top-side split hotdog bun.

At $16, I wasn’t thrilled with the size of the Connecticut roll. It was well packaged for the walk back from the truck, and came with a pickle. I decided to get a $2 whoopee pie too, just to add a little something to the meal. Though small, the roll was stuffed with tender lobster meat, and came with a pickle on the side. The lobster was as delicious as any lobster I’ve ever had. There’s nothing artificial about these rolls, and though much of the meat seemed like it came from the claws rather than the tail of the lobster, it was light and buttery, and ultimately filling.

The bun itself was toasted to perfection and slathered with butter to the point where it didn’t make my hands greasy, but still made the lobster melt in my mouth. The whoopee pie after was icing on the cake. A little sloppier than I would’ve have liked, but the cream inside was rich and delicious.

Overall I was very impressed with Red Hook Lobster. The food was delicious, some of the best I’ve ever had from a street vendor. The only drawback would be that I paid more for this meal than I ever imagined paying at a food truck. For $18, this meal left me feeling very conflicted; my wallet is empty but my stomach is very satisfied.