One bite into his burrito, Louie Hankins knew he had something.

It was the morning after a friend’s barbecue in the summer of 2011. Hankins, now co-owner of the popular D.C. food truck Rito Loco, was looking to find a way out of a job he hated. He had been daydreaming about opening a Tex-Mex restaurant in Spain.

His friend Daniel Diaz grilled a “pretty mean rack of ribs” coated in what Hankins calls “crack sauce.” Along with the leftover ribs, a box of Velveeta macaroni and cheese and a hefty serving of pico de gallo, that sauce found its way into Diaz and Hankins’s breakfast burritos the next day. The results were “out of control,” Hankins says.

Suddenly he had a new dream: launching a “creative” burrito business that would be to Chipotle what Five Guys was to McDonald’s. Within months, he got himself fired from his sales job after “going Jerry Maguire” at a meeting and persuaded Diaz to sign on as his partner. They couldn’t afford to move to Spain; they couldn’t even afford a bricks-and-mortar restaurant. So they did what everyone else seemed to be doing: They bought a truck.

It’s a common narrative, and a popular one, in the food truck industry. Call it the creation myth of the District’s mobile food vendors: Plucky innovators short on capital abandon the tedium of desk jobs and the restrictions of traditional restaurants to peddle their creations to the District’s business-casual-clad lunch crowds.

It’s a storyline that Ché Ruddell-Tabisola, director of the District Maryland Virginia Food Truck Association and co-owner of the BBQ Bus, loves to tell about his industry, especially when he is asked why people should pay $10 for a meal they can’t even sit down to eat. He says trucks offer restaurant-quality food for the price and convenience of takeout. What’s more, it’s food with a vision.

“They’re people who are busting their butts every day to make their dream come true,” Ruddell-Tabisola says. “So there’s a quality and a thoughtfulness and a level of familiarity you might expect to get at a more upscale restaurant. But you’re getting it from a truck.”

To hear him tell it, food trucks are quintessentially of our time, a product of the confluence of the Great Recession and the rise of social media. Washington’s first truck, Fojol Bros., launched in 2009 — not coincidentally, a year the economy was floundering. Sites such as Twitter and Facebook made small-scale roving restaurants a viable option, and the scarcity of credit for small businesses made them a necessary one. So Hankins and other aspiring chefs, who might have tried to open a neighborhood restaurant (which typically requires $500,000 in startup funds), bought trucks instead.

Though the low cost of entry was a selling point, these operators weren’t necessarily looking to do things on the cheap. Ross Resnick, founder of the Web site Roaming Hunger, which tracks the food truck industry in 45 U.S. markets, says that the lean business model of a food truck allows vendors to test unusual concepts at a lower cost. On top of that, the face-to-face interactions between operators and customers meant that trucks appealed to the growing locavore, farmers market-savvy demographic: people who were picky about the food they ate and wanted to see where it came from.

“There was this red-carpet effect,” says Leland Morris, the chef at Red Hook Lobster Pound DC. Morris’s truck was among the first five to follow Fojol Bros., and he looks back fondly on the days when a meal from a food truck came with its own cachet.

“All these people would be on their cellphones waiting online, and when they got to the front, they’d say, ‘Hold on a minute: I’m ordering from Red Hook Lobster Pound.’ It was like you were participating in this event that captured the public interest, and everyone wanted to be a part of that,” he recalls.

In those days, lines for the truck’s lobster rolls would wrap around a block — even though, at $15 a pop, Red Hook Lobster Pound DC’s offerings were a pricey lunch even by downtown standards.

It helped that the District didn’t have much of a street-food scene to speak of before 2009, says Resnick; city residents didn’t have a preconceived notion of street food as being cheap and simple, so they were more than happy to pay higher prices for the more out-of-the-ordinary offerings of Red Hook and its cohorts.

For the most part, that’s still true. The typical food truck dish costs $8 to $12 — about the same as a lunch at a fast-casual restaurant, but more than what someone might pay for a sidewalk meal in a city such as New York, which has a much older street food tradition, Resnick says.

In other ways, though, the District’s food truck scene looks wholly different. For one thing, the industry’s first truck, Fojol Bros., is no longer part of it; founder Justin Vitarello took his last truck off the road this past spring, after the vehicle’s transmission died. For another, there are now more than 150 trucks operating in the capital region, more than 15 times the number that were on the road in 2009.

That has changed the entire business strategy for truck owners, says Anthony Blackwell, director of operations at TaKorean (which first hit the pavement in 2010). Trucks can no longer count on tweeting their location in the morning and pulling up to a curb at 11:30 a.m. to find a crowd of hungry customers.

Instead, “it kind of morphed into this outdoor food court kind of thing,” he says. “You get to Farragut Square and there are 10 other trucks there, and people are choosing between you all.”

And, like all change, this shift comes with its fair share of reminiscing (or griping, depending on whom you ask) about the industry’s good old days.

“Back then, it was only people doing interesting cool concepts and ideas. Now you’ve got people that are just doing normal Mexican tacos or halal or stuff,” Blackwell says.

Brian Farrell, owner of the Italian food truck Basil Thyme, criticizes those newer trucks for riding on the coattails of their gourmet predecessors, taking advantage of the $8-to-$12 price point set by more innovative trucks to sell cheaper food for the same cost.

“The gourmet food trucks started to kind of open the door for more commodity trucks to come in and have their prices escalate,” Farrell says. “I see someone charging $11 for two sliders and fries, and I don’t know whether to laugh, cry or want to strangle that person.”

The increased competition, combined with new city regulations that require trucks to win spots at coveted locations like Farragut Square through a lottery, have pushed Farrell out of the industry. He’s looking to sell his two trucks before the end of the summer and return to his old job selling software. (If that sounds familiar, it’s because he announced the same thing in 2013. This time, though, he says he’s going to follow through.)

“You go into it with your heart and soul,” he says, sounding resigned. “But I think the industry has gone away from that.”

Taha Mamdouh, who owns one of those “normal” halal trucks, begs to differ with Blackwell and Farrell. Though the falafel and shawarma offered at his truck, Papa Adam, are fairly standard, he rejects the notion that his food is less gourmet. He grew up working at his father’s restaurant in Egypt and says he knows his way around a kitchen as well as anyone.

As for the accusation of price inflation? Kitchen rentals are expensive. Ingredients cost what they cost.

“All of this stuff is very tough, for all of us,” Mamdouh says.

From the perspective of Jeff Kelley, a truck owner turned food truck consultant, these changes are a sign of the industry’s maturation. If not every truck owner is an upstart young innovator anymore, that’s because food trucks themselves have become part of the establishment.

“Of course, the kind of mainstays are gonna be like, ‘Ah, it was so awesome back in the day,’ ” he says. “But this is the natural development of a market moving into maturity.”

In his mind, the growth has been a good thing. In the early years, it was almost impossible for truck owners to find commercial kitchens in which they could prepare their food; now, there are dozens. Advances in technology — including credit card readers that attach to cellphones, more efficient generators and more sophisticated cooking equipment — have made it easier to get trucks out on the road. Kelley even applauds last year’smuch-debated food truck regulations, which he says “brought some clarity” to the industry and gave younger truck operators a better understanding of what’s expected of them.

Although food trucks are no longer the city’s trendy upstarts, even the old guard of trucks are benefiting from the industry’s maturation. Ruddell-Tabisola estimates that 21 trucks either have opened bricks-and-mortar locations or have one in the works — BBQ Bus, TaKorean and Rito Loco among them.

It’s not quite a restaurant in Spain, Hankins says. But it’s a step. 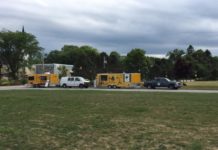 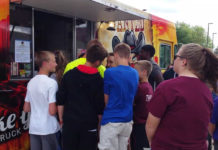 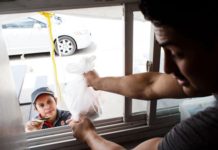