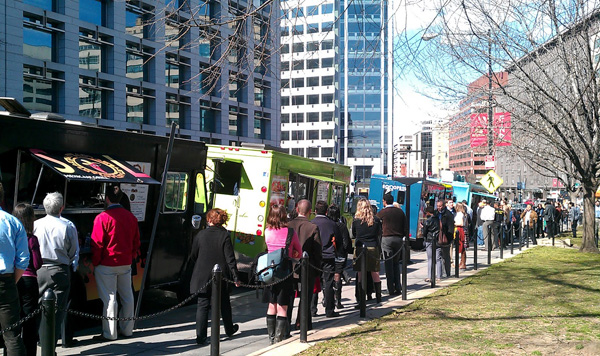 By Anthongy Sodd  |  In the Capital

Admittedly New York makes better pizza than Washington.  There’s really no way the District can compete with a city of 20 million that seems to run on the neighborhood slice. Lets be perfectly honest, New York also has better grocery stores, public transit, fashion sense, and bars.  Also, Central Park is way cooler than the National Mall.  However, one thing we do better down here is food trucks.  At least let’s hope so, as the District and the Big Apple’s food trucks are going to ‘throwdown’ on August 3rd in Southeast’s Canal Park near the Navy Yards.

Basically food trucks from New York and D.C. are going to gather in a big circle in Canal Park and do what they do– serve food.  There will be a panel of judges that goes around and tastes all the food on offer and picks which city does it best.  After they realize that D.C. wins, they’ll give out prizes for truck design and truck crew, etc.

Having moved to D.C. from NYC I’ve often lamented the loss of easy 24-hour access to quality pizza by the slice.  I’ve also lost weight.  At any rate, one thing I have noticed that the District does better than the Big Apple is serve quality, interesting food from a truck.  Traffic congestion in Manhattan seemed to limit food trucks to the outer boroughs and has left the urban core with an endless supply of shitty falafel carts and heavily touristed hotdog stands.  By contrast, D.C.’s Farragut Square is crawling with incredibly diverse quality options.  The District will probably never be able to compete with NYC’s ubiquitous corner slice, but I’m pretty confident our food trucks can beat anything that crawls out of Brooklyn.