By Leo Schmid  |  The Thrillist

Red Hook Lobster Pound
Where To Find It: L’Enfant Plaza, frequently; check their Twitter for specifics
Dish To Get: The Maine-Style Roll
Producing longer wait times than a presidential motorcade, the most popular truck in the DC scene serves up a serious Maine-style roll w/ fresh Maine lobster meat in their homemade, light, lemon-based mayo

Where To Find It: Union Station
Dish To Get: Spam Musubi
Be sure to pick up her “Spam Musubi”, which is nori stuffed with rice and actual Hormel Spam that’s been grilled and teriyaki-glazed, and is much less emotional than a very-similar-sounding spam.

Pepe
Where To Find It: Farragut, Metro Center, L’enfant Plaza… get the daily deets on their Twitter
Dish To Get: Pepito de Ibérico
Considering Jose Andres is in every other facet of the restaurant scene in DC, it only makes sense that he’s also taken to the streets, where you will quickly take to his Pepito de Ibérico: seared Ibérico pork and Serrano ham with roasted green peppers, caramelized onions, and aioli.

Where To Find It: Union Station, L’Enfant Plaza, and even Tysons Corner
Dish To Get: The Giuseppe
The rolling Italian stallion is where you’ll take down housemade sauces & noodles like their Giuseppe: black truffle lasagna with portobellos & gorgonzola.

Where To Find It: Franklin Park, and elsewhere — get the schedule here
Dish To Get: Buttered Chicken or Beef Berbere
Considered the originators of the DC food truck scene, the bros come from two distant culinary lands: Merlindia and Benethiopia. When in Merlindia, get buttered chicken w/ basmati rice; when in Benethiopia, use the injera (bread) to scoop up meat stews like beef berbere.

Where To Find It: Union Market & Station
Dish To Get: The Traditional
Scratch-made delicacies — like the Traditional, shredded beef/spanish olives/roasted red peppers/cilantro — come flying out of a light blue truck or are passed out by more empanad-istas at Union Market.

Where To Find It: Franklin Park
Dish To Get: Bulgogi, Kimchi & Lime Crema Taco
Inspired by the popularity of Korean tacos on the West Coast, this crew lets you pick your own meat (soy-marinated bulgogi), slaw (fresh spicy kimchi), and toppings (lime crema), though the combination we just suggested is obviously THE BEST THING YOU CAN ORDER. 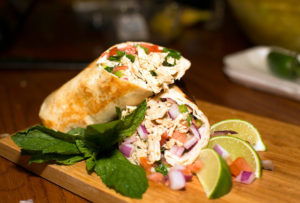 Where To Find It: Farragut, Franklin Park, and all around the city
Dish To Get: Rib Rito
These unique burritos blend Spanish & Cuban cooking for a two-handed meal so nice, it’d make Santa’s list. So, get in line for their Rib Rito and its twice-seasoned baby back rib filling.