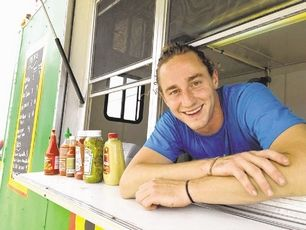 Food trucks won’t be allowed in the Cape Cod National Seashore this summer but might be there next year.

The Cape Cod National Seashore denied a request by Truro food-truck vendor Joseph Rugo to operate at several government-owned locations within the boundaries of the 44,000-acre park. His request was the first in several years and Seashore Superintendent George Price said he needs to fully understand the management issues before allowing the food trucks.

After being turned down by both Truro and the Seashore, Rugo turned to the town of Wellfleet. Late last month, he received permission from the Board of Selectmen to operate at the town-owned Baker’s Field, near Mayo Beach, through the summer.

His first day in Wellfleet was Thursday but he still has his eye on other sites.

“Ideally, I’d like to be at the National Seashore next year,” he said last week.

Rugo’s would not be the first food truck in a national park. Because Hurricane Sandy decimated the concessions stands at Gateway National Recreation Area in New York and New Jersey in 2012, officials there allowed six food trucks in a section of the park known as Sandy Hook the following summer. Otherwise, visitors would have had to drive seven or eight miles and leave the park for something to drink, Karen Edelman, from the Gateway business management office said.

This year on Sandy Hook, there will be eight food trucks, she said. Although they are temporary solutions, the trucks are critical for visitors, and the trucks were quick to mobilize, particularly in 2013, she said.

“We’re learning as we go,” Edelman said Wednesday. “It was a matter of necessity.”

National Seashore officials need to study the potential competition a food truck would create for the park’s existing food concessions, as well as the impact on natural resources and litter, Price said. Also, the Seashore’s concessions management specialist Angela Harris is new to her job and will need about a year to get up to speed on the issue, he said.

It is up to the superintendent of each park to decide whether to allow food trucks, Price said.

“Angela — and we — need to understand it before we entertain it,” Price said.

For Rugo, the discussion at the Seashore with Harris “went pretty far” to the point of talking about menus, music and electricity.

“So I really thought it was going to happen. Then (Harris) said, ‘We met with the superintendent, so not this year,'” Rugo said.

This is Rugo’s first food truck business but he told the Wellfleet selectmen in June that he has been working in the food industry for many years. He sells tacos with Jamaican and Asian flavors, smoothies, Mexican street corn and other inexpensive food, catering mostly to the town recreation department’s daily activities and evening concerts.

At Baker’s Field at around 1 p.m. on Thursday, Rugo attached a flag to the top of his green truck and within a few minutes a handful of people were lined up at the window.

“I’ve been trying to get into Provincetown, Truro and Wellfleet,” he said. “It’s not easy to start a business. There’s lots of hurdles and lots of things the towns need.”

For this summer, Wellfleet will be paid $2,800 to $3,600 by each of the two vendors at the town-managed beaches, said beach Administrator Suzanne Grout Thomas. The contracts for use of town property are awarded through competitive bids.

The selectmen had discussed on June 10 having a competitive bid process for Rugo but the board decided instead to allow him to go ahead for the rest of the summer with his proposal, for a pro-rated $2,500 concession fee, Board of Selectmen Chairman Paul Pilcher said Tuesday.

The fee is prorated because the summer season had already begun, Pilcher said.

Rugo said at the June 10 selectmen’s meeting that he welcomes other food trucks at the Baker’s Field venue.