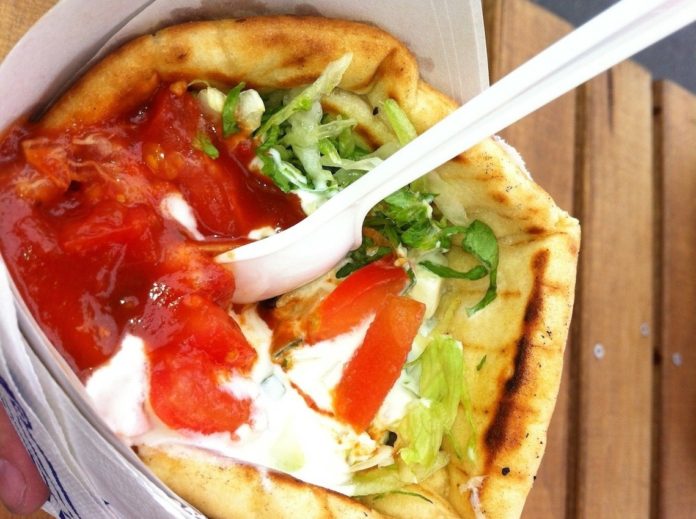 It occurs to me that one of the most efficient ways of conveying food into your gob is to wrap it in thin(-ish) bread-type material, and roll it up. It is present in a number of Middle Eastern cuisines, in Asian food and Mexican food. And I like them all, to greater or lesser degrees.

What most of them have in common is that it is food you can hold in one hand and eat as you stroll. It is convenient food – no mess, no fuss (unless you want to count the slop of sauce that invariably, unfortunately, winds up in my lap when eating a kebab). It is like – a rolled sandwich, of sorts, no?

I am tremendously fond of burritos, even if they do seem to be a more Tex-Mex variant than a proper, traditional Mexican dish (I didn’t, for instance, encounter a lot of burritos in Mexico City – soft tacos and fajitas, yes; burritos and nachos – nope).

(Incidentally, the best burrito I ever ate came from a place in Haight Street in San Francisco, just over the road from the amazing Amoeba Records. It was a bean burrito, and it was full of spicy, savoury, nutty black beans, a sweet, tangy salsa, cheese and salad in a soft flour tortilla. I still think about it from time to time. Sigh.)

There is my great and profound love of the Greek souvlaki, seemingly indigenous within New Zealand to Christchurch. Dimitris, Costas and Nomads have all fed me gloriously over my many years. The souvlaki is an entirely different beast from your garden-variety kebab of the Lebanese or Turkish variety, which is far more common here in Wellington. The souvlaki generally has thicker, denser bread, a more coarsely chopped salad, thick yoghurt sauce and a sweetish, mild tomato sauce. It is something I am greatly looking forward to when I next visit the Garden City.

In Wellington, the reigning kings of the kebab, for me at least, are the magnificent Phoenician Felafel in both Kent Terrace and Cuba Street, in a Lebanese style – my faves are the falafel, mehshi (citrusy rice-stuffed vine leaves), and the spicy sujuk sausage. I am also fond of the Turkish-styled Kilim in Jackson Street, Petone. Theirs is a slick operation, banging out hot, flavourful kebabs at express pace, packed with salad and meat (or falafel!), and generous with the sauces – recommended.

And then there are your Asian variants – the delicious, sour Indian dosai (actually a kind of fermented crepe or pancake rather than a bread, but, you know…), long and thin and filled with either meat or vegetable curry. The best I ever had came from the old Wakefield Street food markets when Roti Chenai had a stall there – I believe they still do them at their restaurant in Victoria Street (I haven’t had one for a while – now there’s an idea).

The delicious fresh spring rolls in rice paper that are popular in Thai and Vietnamese cuisines are another example of wrapping fillings up to make them easier to eat – in this case, they usually feature vermicelli noodles, carrot, cucumber, fresh herbs such as mint or coriander, plus poached chicken or prawns, and are served with a dipping sauce featuring fish sauce, lime, sugar and chilli.

I always find it interesting that different cultures have different variants of the same types of dishes, but that end up offering wildly divergent tastes and textures. The idea for the wrap (or roll) has obviously been shared among different countries and continents by travellers and traders over centuries, making it a ubiquitous meal or snack, especially for lunches, and for better or for worse, for cross-cultural food fusion (YEAH!). You can also cut ’em up and turn them into bite-size snacks.

It makes a pleasing change (even if it is mostly just in shape!) from the conventional lunchtime sarnie, and I reckon the wrap, regardless of its origin (Asian, Mexican, Middle Eastern) is a winner, and I dig them all.

Wraps and rolls – are you partial? What’s your favourite – kebab or souvlaki? Rice paper rolls or dosai? Ideas for fillings?

Wellington, NZ: Good food out of a truck for Porirua duo