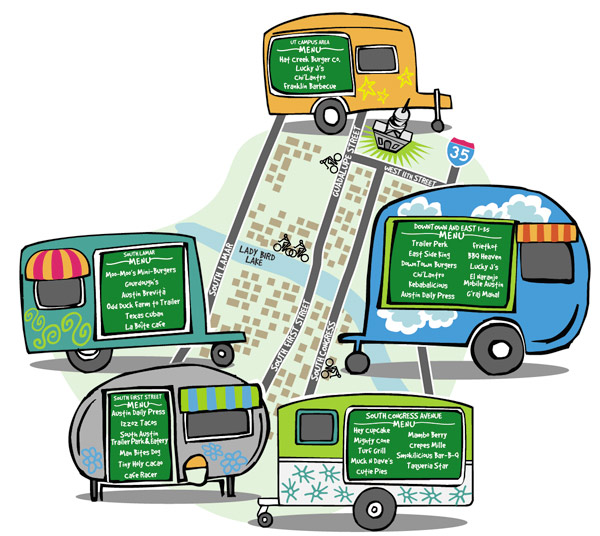 by V. B. Wood | Illustration by L. Lovise

Austin’s trailer cuisine scene is constantly expanding – it seems there are hot, tasty, new mobile dining destinations to check out every time we leave the house. Mobile food vending makes sense when you figure the difference between borrowing $500,000 or more to open a new restaurant in a new or existing building and spending $10,000 for an hip Airstream trailer and a few thousand more for groceries, equipment, and rent on a commercial kitchen and a parking space. Voilà, you’re in the food business! Our active and delicious mobile food scene has attracted plenty of national attention – check out stories featuring Austin food trailers everywhere from the Food Network to CNN and Bon Appétit to The New York Times.

In preparation for the greatly anticipated March tourist invasion, Chronicle contributing Food writers Mick Vann, Claudia Alarcón, Rachel Feit, and Kate Thornberry chose neighborhoods known for their mobile food offerings and set out to discover what’s new on the local trailer cuisine scene. Bear in mind, the operative word for these businesses is “mobile” – in order to maximize their profits over the next few weeks, some of them are likely to be set up in one place during the day and somewhere else in the evening. Keep an eye on Twitter, Facebook, and their websites for changes in location, and go chow down!