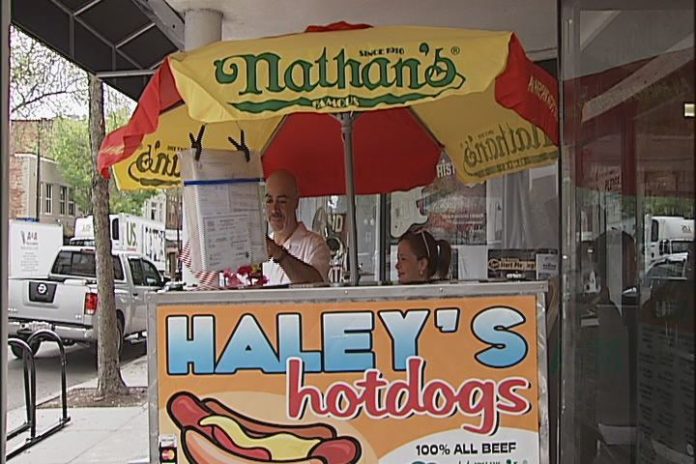 WILMINGTON, NC (WECT) – One business owner in Wilmington has a beef with the city over a hot dog stand.  The owner of Haley’s Hot Dog Cart is boiling mad because he says the city forced him to close down.

In order to operate a food truck or a food cart in Wilmington, business owners must first receive a permit from the city.  Although Haley’s Hot Dogs operates on private property, the city says their business doesn’t cut the mustard.

Lazaro Carillo has been serving up hot dogs downtown for the past six years.  He’s been operating on private property in front of Charley Brownz Nightclub on Front Street.  But six months ago, he decided to move to a new location, half a block away, in front of Finklesteins at the corner of Front and Market Streets.

“The hot dog cart is taking up enough space now that you don’t have transactions and sales taking place on private property,” said Fullerton.  “Now, the sales are taking place on city streets.”

Even though he has all the paperwork in order, Carillo now has to close the lid on his cart.

“I’m frustrated and I feel discriminated because of the way they treat me,” said Carillo.

Earlier this week, Carillo received a cease and desist letter from the city.  That letter states that the city will fine him $200 for every day he’s open.  The city says his only options are to either rent a space or go back to his original location.  With three children and a grandchild, Carillo says he can’t afford to close down.

Even though his business is in violation of city code, Carillo says he plans to keep fighting city leaders to stay open for business.  Carillo plans to hire a lawyer even if he has to use money from his savings account.