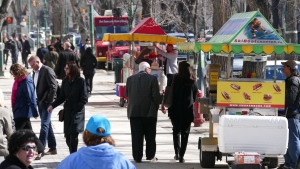 Spring is here and for many Winnipeggers that means happily getting back in line for downtown food truck grub at lunch time. But for the truck owners, spring also brought with it a new vendor fee hike from the city they worry will make life harder on their mobile catering market.

Gary Powers and his wife have been running the Sis and Me food truck for 19 years. Powers said life in the local street food industry has had its challenges over the years.

“It’s been a tough road, and now it’s been made even tougher with these new regulations,” said Powers.

Along with all of the pre-existing fees and difficulties associated with operating a business on wheels, Powers and his competitors are now facing a significant vendor fee increase if they hope to keep urbanites’ bellies full.

Powers said the fee difference between a 22-foot truck and longer units doesn’t make sense. For instance, a truck that is 25-feet-long would be paying roughly $660 for those three extra inches over what the 22-footers would pay.

While he appreciates the fact that the new fees include the cost of parking, he argues they don’t account for the fact that not all trucks will be operating downtown everyday.

“I know someone who has two food trucks, so that’s costing him $7,000 to get him his permits,” said Collins. “This week he was in the process of signing papers for a third truck and he said, ‘No, I’m not going to sign it,’ because he doesn’t want to pay $10,000 for permits just to park in the city”

Mark Langtry runs Habanero Sombrero and said his truck is well over the 22-foot limit. He said the hefty fee at the beginning of the season could influence certain owners to stop doing business in Winnipeg.

“Right now the way they are doing it; these are the new fees, take it or leave it,” said Langtry. “I know some people are going to leave, because it’s too high to pay for the amount they are there.”

The City of Winnipeg said the increase has already been passed by city council. They are encouraging food truck vendors to come forward and provide feedback.

But for Powers and others of his ilk, this summer could be tougher than past years.

“It takes a lot of money to make up that massive increase,” said Powers. “We’re not millionaires.”

The food truck association plans to meet with council. It hopes the city will consider changing the permits so owners are relieved of the flat rate and can pay on a month-by-month basis