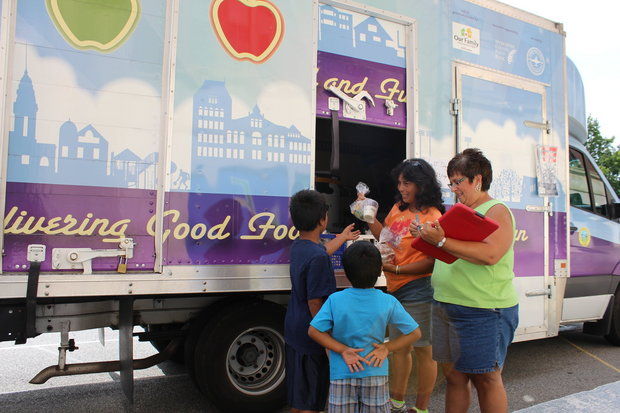 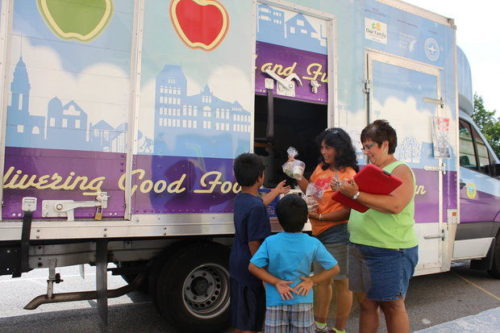 As Maribel Damik and Doreen McElroy handed a yogurt parfait to a young boy and a sunbutter sandwich to his brother, they knew that they had helped to prepare the children for their return to school.

Throughout the summer months, Damik and McElroy have traveled to city parks, schools and public library branches to distribute nutritious meals to children. In its second year, the public school district’s summer food distribution program is part of an overall initiative to help maintain good nutrition for growing students, some of whom rely upon the meals normally offered during the traditional school year.

“I think it’s the best thing ever,” McElroy said recently. “It’s the last meal of the day for some people and we’re able to provide them with nutritious food that follows the same guidelines we use in school.”

In Worcester, where 74 percent of public school children are eligible for free or reduced priced meals, there were 42 distribution sites (31 of them open and 11 requiring pre-registration), including the city’s main library in Salem Square and at branches. The food truck stopped at more than a dozen of those sites Monday through Saturday.

In 2013, the program, locally administered by the public school system and Friendly House, served only 12 percent of eligible Worcester children. On Tuesday, Worcester schools Director of Nutrition Donna Lombardi said that the program tripled the number of meals distributed. She attributed the increase to greater familiarization with the program, extended hours and the new partnership with the city library system and other organizations, such as the Worcester County Food Bank and Stop & Shop’s Our Family Foundation, that helped bring the truck and the food into remote neighborhoods.

“The school department and the city really are concerned about the well being of the students and it really it does take a village. Our goal is to ensure that these students are well nourished and ready to learn,” she said.

The district tried to schedule the truck to complement the school lunch program, so that when school ended there was still a constant source of food for students. With summer vacation over, Lombardi and her staff are making the transition back to the in-school nutrition program, which includes breakfast at most schools, lunch and an after-school snack.

“Recent studies are showing that if there is an interruption in food environment during a student’s growth period it has potential to hurt the learning experience,” Lombardi said.

The program, which is funded by the U.S. Department of Agriculture and administered by the state Department of Elementary and Secondary Education, with support from the Child Nutrition Outreach Program at Project Bread, is one of many that operated throughout the Commonwealth during the summer.

In Worcester, Damik and McElroy found themselves almost reaching local celebrity status as people became familiar with the truck and students started to recognize them from school. Damik works in the kitchen at the Norrback Avenue School and McElroy at the Nelson Place School.

The women said it feels good when they pull into a site and people are waving at them. Residents have come to recognize the truck and the students from Norrback and Nelson Place enjoy getting to see their lunch ladies.

“It’s been a fun experience, and now I get to see them again on the first day of school,” Damik said.

Lombardi already has plans for next summer: a second food truck will be on the road and the menu will be expanded.

“We’re fortunate to be able to have this vehicle to serve locally grown fruits and veggies throughout the summer and that they want it. We have the philosophy that if the food tastes good, and that’s where the locally grown and sourced products come in because often do taste better, the kids will want to eat it,” Lombardi said