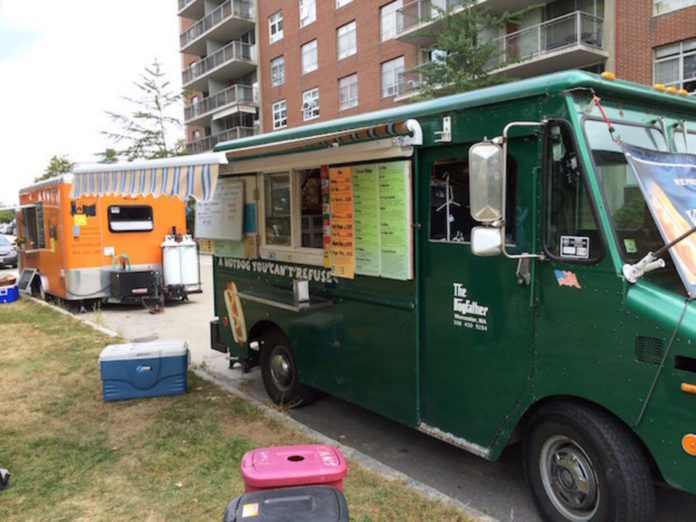 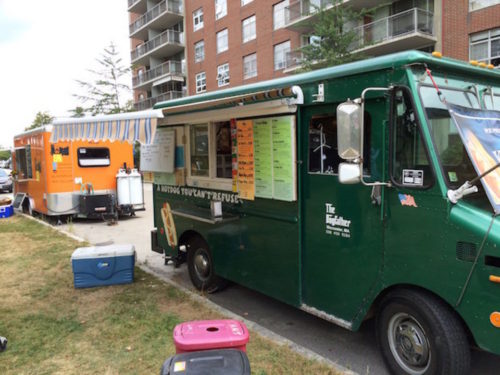 WORCESTER — Drive by Institute Park in Worcester and you might catch a whiff of hot dogs and grilled cheese. The first food trucks to try Worcester’s new pilot program — The Dogfather and Say Cheese — rolled out onto Humboldt Avenue on Friday.

The trucks, under the temporary license, can operate Fridays and Saturdays, for limited hours. Mark Gallant, owner of The Dogfather, and Teri Goulette, owner of Say Cheese, both opened at 11 a.m.

The first lunch rush was not much of a rush, but not a dud, either, according to the truck owners. Both said business was fair, but not busy. Both also noted that they had only been open a few hours.

“I think it will get better as word of mouth spreads,” Goulette said.

“It’s not been bad. It’s been rather brisk,” Gallant said.

By 1 p.m., both reported having served roughly 15 customers. Both also said the customers were split between new customers and previous customers.

“About half were people who had had our sandwiches at events we have done who follow us on social media,” Goulette said.

Gallant, who has a second truck operating on Shore Drive joked he was his own competition today, noting half of his customers were regulars.

Food trucks have, except in key locations outside of downtown, been missing from Worcester since 2008, during the fiscal crisis. At that time, restaurants complained the trucks were hurting business and the City Council placed heavy restrictions on their operations, including requiring them to move 500 feet every 15 minutes and banning them from locating near restaurants and the DCU Center.

In June, City Manager Edward Augustus Jr. announced his intention to allow food trucks back into the key areas as both an economic development tool and at the request of residents.

The City Council did not approve the program until September, however. The pilot program ends in November, but could lead to routine licensing if deemed successful.

Humboldt Avenue is on the southeastern side of Institute Park. Traynor said it was chosen as one of the sites for trucks due to its location. There was a call to put the trucks at Gateway Park, but Humboldt Avenue connects Gateway park and WPI’s main campus, and it gets a lot of foot traffic.

Gallant and Goulette both said they are interested in continuing, should the City Council make the pilot program a regular part of Worcester’s food industry.

Goulette, who started in May, does not have a regular location, but has done festivals and events, as well as the Brimfield Antiques Show.

Gallant said his location on Shore Drive is his “bread and butter,” but he owns three trucks and has simultaneously located in other spots in Worcester in the past and would again.

The pilot program will allow food trucks in three zones. Those zones are: North Franklin Street, near the City Common; the west side of Russell Street, from Highland to William Street; and the west side of Humboldt Avenue, near Salisbury Street.

The licenses expire Nov. 30, after which Traynor will report back to the City Council. Among the issues City Council wants monitored was trash collection/cleanliness by the trucks and customers, as well as the impact on brick and mortar restaurants.