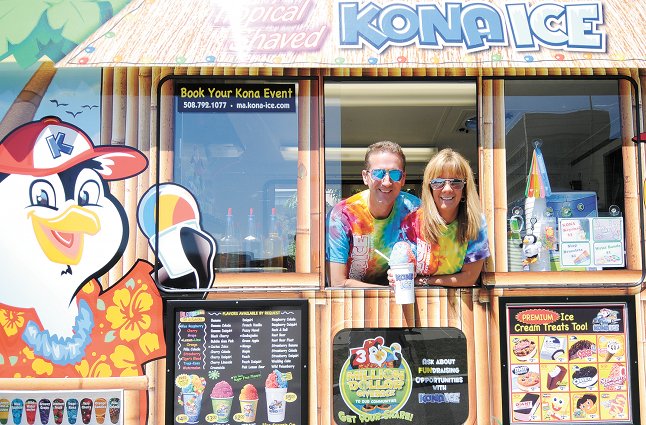 For Worcester, the food-truck phenomenon started back in the late-19th century when T.H. Buckley’s Worcestermade lunch carts started serving sandwiches, boiled eggs, pie and coffee to the late-shift workers in factories downtown.

Today, a new generation of highend, gourmet food trucks is on the road, and on Saturday, July 14, a caravan will pull into Elm Park for the Food Truck Festival of New England. From 11 a.m. to 4 p.m. the trucks will be serving up everything from artisan grilled cheese sandwiches to falafel to authentic Texas barbecue.

Worcester’s own Kona Ice wil l be part of the lineup. Shawn Smith and his wife, Ellen, jumped into the exotically flavored mobile shavedice business a couple of years ago. Smith, who also owns an electrical contracting company, got a little tired waiting for economic recovery to trickle down to the trades and decided to try something new.

“We go to a lot of local concerts, events and fundraisers,” explains Smith. “People want to see more food trucks. They like the convenience, they get what they want and move on.”

Kona Ice is typical of the new wave of food trucks that started on the West Coast and migrated east.

“What we make isn’t your regular snow cone, which, a lot of times is a flavorless ball of ice in a cup,” says Smith. “Our shaved ice is more like snow, and we have the best of the best of flavors.” Those flavors include creamsicle, French vanilla, peach and wedding cake.

“It’s gourmet food on wheels,” says Anne-Marie Aigner, who organized the festival to showcase the trucks.

Aigner says bringing the trucks all together as a festival lets people sample different menus that offer a wide range of foods such lobster bisque, savory and sweet crepes, vegetarian pockets, salads and rice bowls and specialty ice creams and sweets like Kona Ice. Like Smith, Aigner figures the food trucks have caught on because they offer a dining-out experience that’s easy and affordable.

As for the cooks, Aigner says people have embraced the food-truck craze for different reasons. For well-known and well-established restaurants, a food truck is often about mobile marketing.

But for others who dream of owning a restaurant but don’t have hundreds of thousands of dollars to invest, a food truck can be an alternative entry point into the business.

For Danbury, N.H., residents Alex and Bob Graf, a food truck was actually a re-entry point. The Grafs had eight years tied up into their inn and German bistro when the recession forced them to shut down. But the Grafs got back up again and launched Schnitzels & Giggles, a food truck that serves German food.

The Grafs have embraced a new lifestyle as food gypsies who travel through the South during the winter and head north when the weather gets warm. At home in New England, they work their way along the busy route of festivals and fairs serving sauerkraut, spätzle, wiener schnitzel, German potato salad and homemade bratwurst that comes either on a roll or on a stick.

“A lot of the trucks serve food on a stick,” says Aigner. “But there’s a lot more. The variety is amazing.”

Fancheezical, Captain Marden’s Cod Squad, Gabi’s Smoke Shack and Bon Me, which specializes in Vietnamese cuisine, are just some of the trucks that will be heading to Worcester to join Kona Ice this Saturday.

Food Truck Festival organizers will be selling blocks of taste tickets in books of 10 tickets for $13, and 20 for $25. Tickets are good at all the trucks at the event. Check out foodtruckfestivalsofne.com for more info.