WORCESTER – The Canal District’s newest bar, Whiskey on Water, will bring a combination of whiskey and food trucks to the marquee spot on Water Street next month.

The new bar is opening on the corner of Water and Harrison streets, where Jose Murphy’s operated before a pipe burst closed it in 2013.

“This space is the marquee space of Water Street and it’s been empty for 18 months,” said co-owner Michael Erlich, who is opening the new bar along with his brother Mark Erlich and third partner Kurt Friel. “We think by bringing this space back it’ll help the whole district.”

Whiskey on Water, the brainchild of the same owners at Perfect Game sports bar down the street, is expected to open next month with their unique concept.

“This is an extremely new concept that we haven’t seen anywhere else,” said Mark Erlich of their food truck plan. Erlich said the trucks will change nightly and the menu will be posted on the bar’s calendar and social media pages.

Food trucks from across the state are being invited to park in the back lot and serve exclusively to Whiskey on Water patrons on a weekly rotation. The owners say they’ve partnered with some trucks already, including the popular Worcester truck The Dogfather, but are inviting more to apply.

The food trucks will also serve late night, unlike many bar menus in the area.

The bar will be pairing its food truck food with a variety of 400 to 450 whiskeys.
The whiskeys will be of all costs and varieties including international offerings as well as American bourbons and ryes. Prices will vary from a $5 rail variety to a $40 glass.

Although it’s just down the street from their other bar Perfect Game, which has been open for six years, the Erlich brothers say they see this opening as benefitting all the bars in the Canal District.

“We want Water Street to be the Lansdowne Street of Worcester,” Mark Erlich said.

Appealing to the college crowd in Worcester, Whiskey on Water will also be hosting DJs on the second floor and keep it open for dancing.

The planned opening for Whiskey on Water is sometime in February. They’ll be open on Thursdays through Saturdays to start with hours from 4 p.m. to close. The owners say they foresee the hours expanding to include more weeknight happy hours and Sunday brunches. 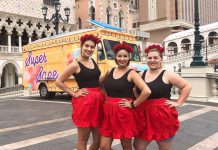