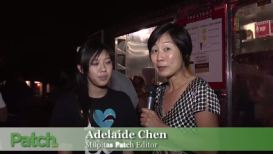 Even before the premiere of The Great Food Truck Race on the Food Network, mobile food has been a popular and delicious food trend.

Once known as “roach coaches,” restaurants on wheels have become part of a food revolution in the Bay Area and have spread to Milpitas. Two gourmet food trucks have discovered the old Mervyn’s parking lot. They broadcast their arrival on Facebook, Twitter and other social networks, bringing along a loyal group of patrons.

Based in San Jose, Treatbot and Mogo have tantalized the tastebuds of residents.  They offer a unique menu of options ranging from Korean tacos to ice cream with a musical flare.

The creation of Treatbot was “a natural outcome when you take two people who want to simultaneously bring awesome food while creating new social space,” owner Ryan Sebastian said.

Sebastian, an urban planner, and his wife, Christine, a culinary-trained chef, created Treatbot, a karaoke ice cream truck, in early 2010.

“I think from the beginning, we wanted something that was simple and with low barriers to entry,” Sebastian said. “An ice cream truck fit that bill perfectly.”

“Treatbot may operate in a present context, but we are all about the future,” he said. “We even live stream our karaoke performances online. We consider our model disruptive to conventional thinking of what constitutes a traditional ice cream parlor.”

The gourmet ice cream truck offers unique and enticing flavors such as The 408, a “perfect combination of caramel, Oreo and fudge that somehow manages to avoid being too overly sweet,” Sebastian said.

Another popular flavor is East side Horchata, which has become the reason why many Treatbot customers stalk the ice cream truck.

Ta said Treatbot is unique, because it offers quality ice cream that comes in a range of flavors in a setting you wouldn’t normally find at a traditional ice cream parlor.

“I mean, we do have neon lights on the truck,” she said. “I think people like that there’s good ice cream available in a place where you can bring their friends and hang out and maybe sing some songs.”

The Bay Area’s reaction toward Treatbot has overwhelmed Sebastian.

Sebastian said the Bay Area is the perfect place to start a food truck.

“The Bay Area is full of sophisticated people with sophisticated taste, but you can’t really see that if you walk into your average strip mall,” he said. “For all our high-tech prowess and international flavor, our urban environment is typical postwar suburbia—dull, banal and lacking in any sense of place. Food trucks can turn a forlorn parking lot into a community festival.”

MoGo BBQ started in January, but the concept for the company came long before that, said founder Sam Pak.

“I was inspired by the food-truck renaissance taking place here in the Bay Area and also in Los Angeles,” Pak said. “I felt that the Bay Area was lagging somewhat behind Southern California in what we offered in terms of mobile food, and I wanted to offer the same kind of affordable, yet gourmet food here in the San Francisco area.”

Pak calls MoGo a “renegade food truck,” because they have only a few set locations to set up shop.

“Most of the time, we don’t know until a few hours prior to driving out where we are headed, and we let our fans know of our locations via Twitter and Facebook,” he said, “This keeps us agile so we can go where the action is.”

Pak said they’ve been very fortunate to have such a great word-of-mouth support from their fans.

“They are truly the heart of MoGo BBQ, and it’s been amazing to watch our fan base grow and grow because of the enthusiasm and support of MoGo’s earliest adopters,” he said. “We really appreciate all of our MoGo Family and will continue to do our best to give the love back to the Bay!”

The most popular item at MoGo is its short rib burrito, but it also offers slaw, marinated meat and kimchi rice.

“We also have MoGo nachos, buffalo wings, fried chicken and short-ribs fries coming out soon,” Pak said, “So look out for that!”

Pak said the Bay Area is the perfect place for food trucks because the residents “are amazing and love good food.”

Pak said the food-truck revolution meets the demand for high-quality food at a reasonable price.

“People like variety, and specialized food trucks are the answer,” he said. “It’s been amazing to see all the different food trucks spawn up this past year.  It’s really exciting, and I hope it continues.”

As the food-truck revolution continues to evolve, a new species of food trucks are being created, including WOW!, a gourmet food truck serving up sisig, a traditional Filipino cuisine. Keep your eyes peeled and your Twitter and Facebook on high alert for when WOW! rolls to a street corner near you.