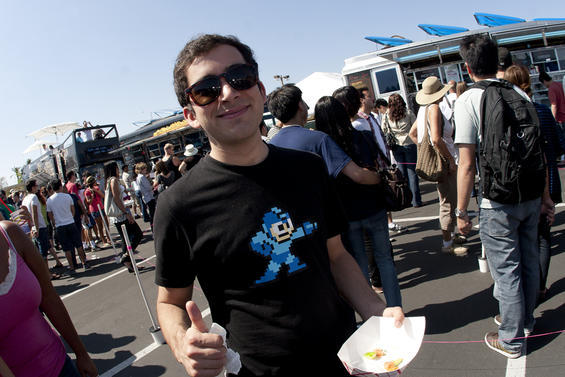 When the food truck phenomenon first started, parking and setup were very much a fly-by-night operation: a single truck would find a spot, park, then Tweet its location to hungry fans. There was a sense of stealth to it; it was almost like electronic samizdat.

When the first truck “fest” happened in Los Angeles, then, it caused a huge reaction, because for the first time people could go from truck to truck and sample various foods. The response was overwhelming; the line just to get in stretched around the block, surprising even the organizers.

When the OC Foodie Fest happened earlier this year, it was much the same phenomenon: trucks that rarely made it to Orange County came, which caused people from all over these fair orange acres to drive to Anaheim where they were met with a stiff parking fee and an entrance fee just to be allowed to go stand on line for the trucks and pay for their food. I’m not faulting these fests at all: there are costs to recoup. Facility rental, security, cleanup, johnnies-on-the-spot, marketing, etc. all have to be paid for, but that doesn’t change the fact that it was $27 just to park and get inside the perimeter, before purchasing any food.

When it was the only way to visit a number of trucks in any efficient manner, it was one thing; now that there are food truck gatherings from Lake Forest to Los Alamitos, where three to six trucks park at a designated spot, these paid gatherings aren’t necessary. That sense of adventure has gone largely by the wayside as trucks have established regular rounds.

I was surprised, then, to see that this weekend’s CHOC food truck fund-raiser at Knott’s Berry Farm had an $8 admission and the usual $12 parking at Knott’s, especially when OCEA had a free-to-enter festival this weekend as well. The admission is understandable in this case–it’s a fund-raiser, after all–but again, it’s $20 out of your wallet before you get the first bite of food (which you have to pay for) in your mouth.

It was fun while it lasted. I can find the trucks without paying for the infrastructure of an organized festival. Let’s all move on, please.