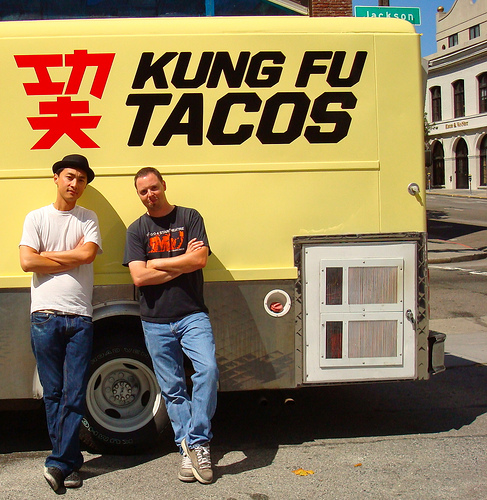 OAKLAND (KCBS) – Gourmet food trucks are the latest culinary trend to take a hold of the palettes of Bay Area diners, popping up nearly everywhere except one major city – Oakland.

In that city, established restaurants and the mobile vendors are locked in a real-life food fight for survival.

The food trucks are becoming more and more like dine-in restaurants, serving up gourmet fare at a fraction of the price. But as the trend has exploded over the past couple of years in a number of cities, Oakland’s established restaurants are taking on the start-ups head-on.

“We would love to be able to park in the middle of the street in downtown Oakland for lunch and serve people. But it’s illegal,” said Aron Ford who runs Vesta Flatbread. “We make our bread here in a brick oven and we make sandwiches with our bread.”

And people would line up to buy those sandwiches if they could said Elizabeth August with Guerilla Grub.

“There has been a year and a half of city staff time and resources spent writing and coming up with proposals to the city council, but they keep getting rejected,” she said.

August is one of the driving forces behind a petition to allow trucks to park in all parts of Oakland, not just Fruitvale, where it is permitted.

But the Oakland Restaurant Association has its own concerns.

“Could an existing restaurant suddenly find eight mobile food vendors on their busiest Friday and Saturday nights right across the street in a parking lot picking off business on their key times?” said Paul Junge with the Oakland Metropolitan Chamber of Commerce.

Part of the problem according to Junge is that restaurants have so many costs that trucks don’t have and a lower profit margin. And owners are concerned that these gourmet “meals on wheels” could drive them out of business.

“It could be the difference between staying in business and closing up,” said Junge.

The cities of Davis and Sacramento virtually ban food trucks because of this same debate. Now, Oakland is struggling to find the right recipe that works.