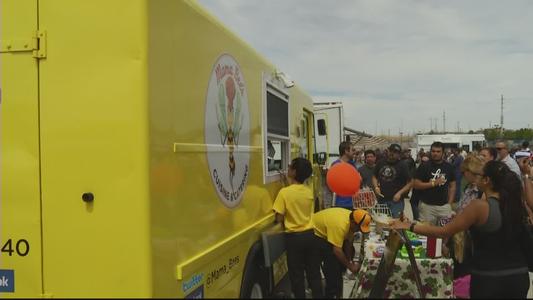 Food trucks took over Balloon Fiesta Park on Saturday and New Mexicans literally ate them out of business.

Chicharrones was one of the first things to sell out, and then truck by truck started running out of food. It got to the point where they had to end the Great New Mexico Food Truck Festival more than an hour early.

The organizers of the event say they’re typically based out of New England but all the snow had them chasing the sunshine. They said Albuquerque has been their biggest turnout ever in any other city across the country.

“It’s all about the food. It’s creative, gourmet food. It’s not your father’s roach coach from years ago. It really is chefs or corporate chefs who now decide to do their own thing,” said Anne-Marie Aigner with Food Truck Festivals of America.

The organizers already have plans to come back next year with twice the amount of food trucks, twice the food and twice the beer tents.