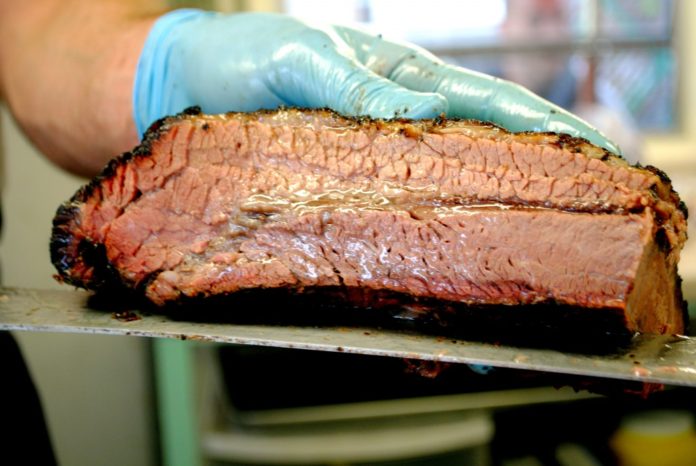 We’re from Texas, we like BBQ and we know good BBQ when we taste it. There are many “just ok” places in Houston, and honestly, I don’t have a favorite within the city limits. In my opinion, the best place closest to home is Junior’s Smokehouse in Hempstead, just past Cypress on 290.

But last weekend we weren’t in Houston, we were in Austin, enter a whole new playing field. Austin has a pretty good rap for some of the better Texas BBQ spots, think Salt Lick, Stubb’s and The County Line. But we wanted to try something different, and what better than BBQ from a food truck?! Food trucks are popping up in Austin all over the place, many with BBQ, many with other inventive items, like donuts and crepes, and we had to take it for a whirl.

Our friend Mike invited us to try a dive in his neighborhood, Franklin BBQ. He told us that they open at 11am, at which time the line is usually already 25 or so deep and they close around 1pm, which is when they typically sell out. He also swore that their meat was some of the best he’s ever tasted, with special mention to the brisket. Well hot damn, bring it on!

As fate would have it, it was raining on this Sunday morning, but we had umbrellas so we trucked on! We walked the 2 blocks over from Mike’s house to Franklin’s around 10:40am. I was sure the line would be light due to the rain — wrong! we were about 20 back and the smoky aromas were kicking, the anxiety already started sinking in. As we waiting anxiously for the window to open, I noticed the line getting longer and longer. Rain would not stop these hungry folks.

I waited for what seamed like an eternity and it was finally OUR turn to order!! We had to sample it all of course, so we got a 1/2 lb of each: brisket (lean), brisket (fatty), ribs, pulled pork, sausage.  ok, ok, I know what you are thinking – FATTY! but we did have leftovers and we ate it for lunch and dinner the next day too!

I sat back and watched Aaron package and slice our order, as he joked around and chatted it up. The smell and sight was almost too overwhelming! But finally, $35 dollars later it was MINE! We briskly walked back to Mike’s and finally got to sink our teeth into “meat nirvana”! This BBQ was so insanely good. The meat was amazingly flavorful, juicy and tender. No place has quite stacked up like Franklin. I urge you to try it out, and yes! it’s worth the drive for you Houston, San Antonio, and DFW folks.

We drove back by around 12:45, and they were already sold out! Get up earlier next time people! (womp, womp)