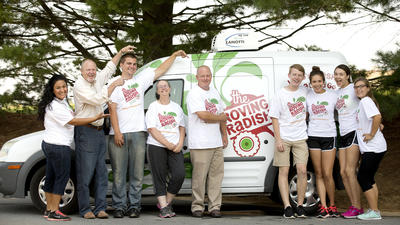 By Fatimah Waseem  |  The Baltimore Sun

At the line separating Howard and Carroll counties, farmers at Love Dove Farms and Gravel Springs Farms are helping close the farm-to-table gap through the Roving Radish, a local healthy food initiative that delivers kits of pre-chopping produce, meat and other ingredients to seven locations throughout Howard County.

The program, launched by former Howard County Executive Ken Ulman two years ago and continued under County Executive Allan Kittleman, is entering its third season with new locations and expanded services as it continues to cultivate relationships between local farmers — across and between counties.

Paul Sorenson, owner of Gravel Springs Farms in Union Bridge, joined the program this year at the recommendation of his Howard neighbor, John Dove, of Love Dove in Woodbine, who has been a regular contributor since the program’s inception, sparking the beginning of what Sorenson hopes will be a long-term relationship.

In turn, the relationship with the county has helped Love Dove attract more customers, said Dove. “Those who buy into the meal program sometimes seek out our farm at farmers markets after loving our veggies or recreating a meal,” said Dove.

Every week from the beginning of June until late November, Roving Radish sells healthy meal kits to Howard County residents, with discounted prices to those in need. Meal kits, which include two meals for a family of four, are sold for $28 and at a discounted price of $12, according to the program’s website.

At least 15 farms ranging from Breezy Willow Farm in Sykesville to Triadelphia Lake View Farm in Glenelg have signed on this year, according to James Zoller, the county’s Roving Radish manager.

“These smaller to midsize farms are growing produce and protein. It’s important that we keep them around,” said Zoller. “We’ve done a good job in preserving farmland, but we haven’t really addressed preserving farming as an industry by creating markets that will work for them.”

As interest in the program grows, the number of kits the Roving Radish will sell per week increased from 145 last year to 200 this year, according to Zoller. This year, the program also added two new locations at the Ascend One building in Columbia and the George Howard building, the county’s government campus in Ellicott City.

“Every single year, we have sold out the volume we were able to produce each week. If we could produce more kits, we would sell all of them,” said James Caldwell, director of the county’s Office of Community Sustainability.

“This is our next big push. We have to find new markets for our farmers,” said Zoller.

Going forward, the goal is to make the program as self-sufficient as possible, said Zoller. The program relies heavily on volunteers who package and prepare kits for distribution, giving the community a “defined stake” in the program, said Zoller.

For Zoller, finding a sustainable niche for farmers in the county is personal. The Howard resident grew up on Valley Haven Farm, a 75-acre farm in Ellicott City that once spread across a vast 175-acres.

“Farming is a way of life and it’s becoming a hard way of life. It’s important for us to keep the heritage that is still there. We have to make that connection stay alive.”

To learn more about the program, locations and meal kits, go to the Roving Radish website http://www.rovingradish.com.