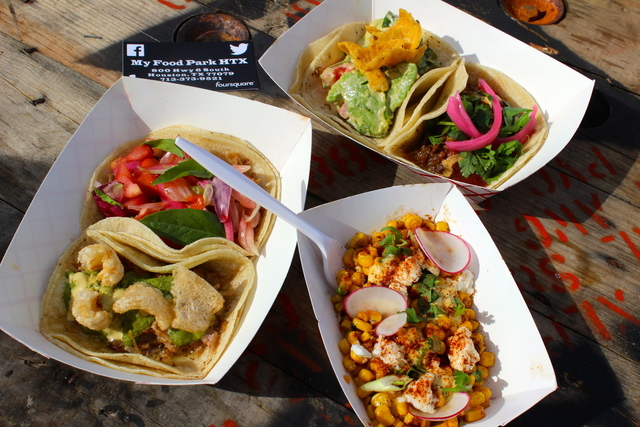 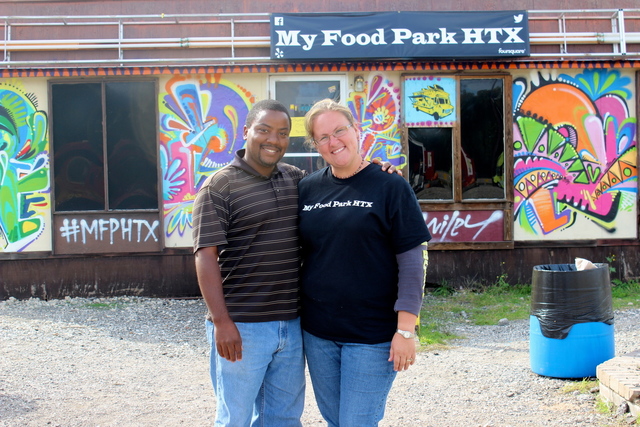 Like most commuters, Liz and Jerry Hale were tired of driving. The husband and wife team had operated the popular Zeapod Cakery food truck for five years, much of that time spent driving the truck from their home in far west Houston into the city’s central core to sell their baked goods to Inner Loop lunch and dinner crowds. One day, Jerry had enough.

Liz is from the city. She went to Sharpstown High School, is used to navigating traffic and the hustle of city life. Jerry is from the country, from a small town in East Texas tucked away behind the Pine Curtain. When he spotted the grass-and-tree-covered acreage for sale on Highway 6 that backed up to Addicks Dam, Jerry felt like he’d come home. So he bought it. And with Liz’s help—and the support of the Energy Corridor District—he made sure they’d never have to commute in the little Zeapod Cakery truck again.

My Food Park HTX officially opened for business on November 5. Unlike other spots where you’ll find a food truck or two decamped around the city, the Hales made sure their three-acre park would have certain amenities: seating for patrons—placed exactly far enough away from the trucks to comply with City of Houston regulations—and plenty of shade for Houston’s aggressively hot days. There’s ample parking. There’s even music playing, and fire pits to huddle around on our rare cold nights. 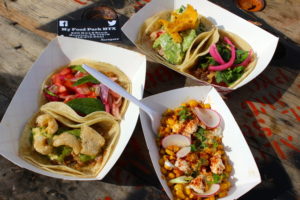 Yes, My Food Park HTX is open for both lunch and dinner, with a variety of the city’s best food trucks rotating in and out every day. It’s one of a handful of such parks that have opened lately, both inside the Loop and outside: there’s the Houston Food Truck Park in EaDo, which opened a few months ago (although it doesn’t have the benefit of seating or shade), and the brand-new Mangum Food Park on Highway 290, whose tree canopy and giant Jenga sets on wooden picnic tables call to mind the Austin-style food truck parks which Houston has lacked for years.

The allure of these Austin-style food truck parks isn’t just in the shade and seating, however. It’s in the variety. On the day I visited My Food Park HTX last week, plenty of favorite food trucks were lined up and ready to serve: Taco Nuts (from former Yelapa chef L.J. Wiley), H-Town StrEATs, Speers Rolling Bistro, Flaming Patties, Fork in the Road, and a few new trucks I didn’t recognize. Zeapod and Kona Ice were there, too, selling desserts and drinks. I arrived close to the end of lunchtime—which runs from 11 a.m. to 2 p.m. Monday through Friday—and saw that the trashcans around the property were full, the sign of a successful lunch crowd.

From inside his Taco Nuts truck, Wiley told me he’d long been trying to break into the Energy Corridor at lunch, but could never find a spot to park his truck. “The campuses don’t want us,” Wiley said, referring to the big BP and Shell campuses nearby. “They don’t want us competing with their in-house cafeterias and delis,” he explained. But the massive lunch crowds that have been heading over to the food truck park at Highway 6 and Memorial Drive would indicate that the employees at those campuses do want the food trucks there.

And though the Hales are simply content not to drive anymore, they acknowledge that part of the allure of creating a food truck park wasn’t just to cut down on commuting times—they were eager to bring some of the city’s most inventive food (and some of its toughest chefs) to a new market, which itself was eager for a fresh infusion of lunch and dinner options. But that’s not all they hope to bring to the Energy Corridor. 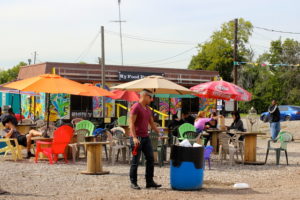 “We want to make a farmers market over there,” Liz told me, pointing to a series of metal structures that already form the shape of a roadside produce stand. “We get so much shade in the afternoons right here. It’s just beautiful.” Behind the future market area, the acreage goes from gravel to grass, surrounded on three sides by dense thickets of trees. Back here, where many people choose to dine, it’s quiet. You can barely hear the traffic from Highway 6; you feel like you’re in the country.

Jerry has cut a passageway into the thicket of trees at the very back of the property, which backs up to the Addicks Dam hike and bike trails—those that connect to Hershey Park, then to Memorial Park, then to the Heights, and beyond. He wanted another entrance for the already easily accessed food truck park. Last week, a man on a bicycle came in through the path. He’d come for the food trucks. But Jerry laughed when he found out where the man had ridden his bike in from: not from nearby, where the Hales have brought a slice of the Inner Loop out to far west Houston—but all the way from the Heights.