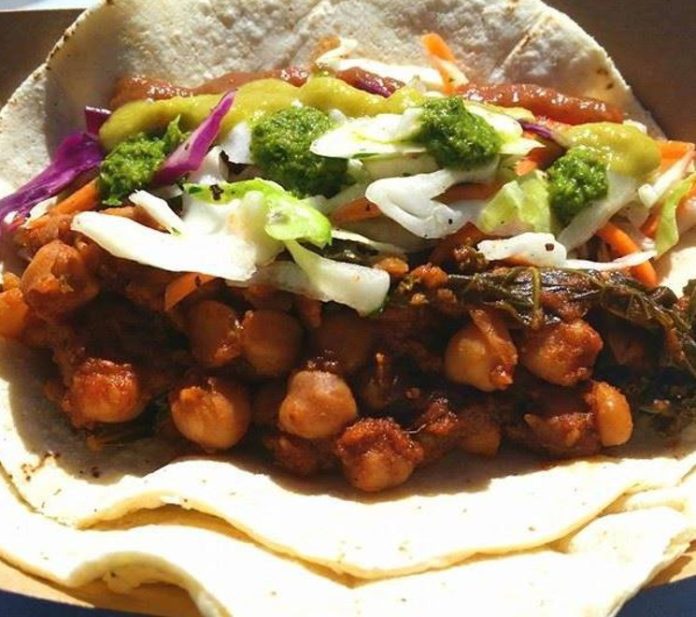 Of all the tacos served and eaten at our Mexican street-food festival, Tacolandia, some of the most memorable came from a food truck called Roxie’s Tacos, which topped fresh flour tortillas with a variety of Indian fillings, from chana masala chickpeas to its aromatic Red Oven Chicken. Tracking down food trucks outside of food festivals can often prove difficult, but now you won’t need to wait until the next Tacolandia next summer: Roxie’s Tacos is opening a permanent location at 1135 Broadway in Boulder.

Owners Fletcher Starkey and Roshani Patel are throwing a grand-opening party for Roxie’s on Wednesday, January 18, where they’ll serve $1 tacos until they run out. Expect the chana masala and Red Oven Chicken tacos, along with saag paneer (that’s soft Indian cheese with spinach in a creamy yogurt sauce), papadum bowls and traditional Indian sauces like cucumber-mint raita and tamarind or cilantro chutney.

“We are proud to feature tortillas made fresh daily at Las Americas in Longmont, our favorite local tortilla shop, and purchase our produce from Grower’s Organic in Denver,” says Starkey, the chef for Roxie’s.

Patel and Starkey recently moved to Longmont from San Francisco, where they ran CDXX Restaurant and a catering company. They’re both trained in the culinary arts: Starkey studied at the Culinary Insitute of America in New York, while Patel attended Le Cordon Bleu in San Francisco. Starkey was also a chef at Google headquarters in Mountain View, California. With their move to Colorado, the two are embracing regional ingredients and have developed a green chile sriracha sauce that will be part of the opening-day menu. Starkey adds that Roxie’s will also have vegetarian, vegan, gluten-free and dairy-free options, along with housemade beverages like coconut almond honey chai and a hibiscus cooler.

Roxie’s is located on University Hill in Boulder and will initially be open from 11 a.m. to 6 p.m. Wednesday through Sunday.