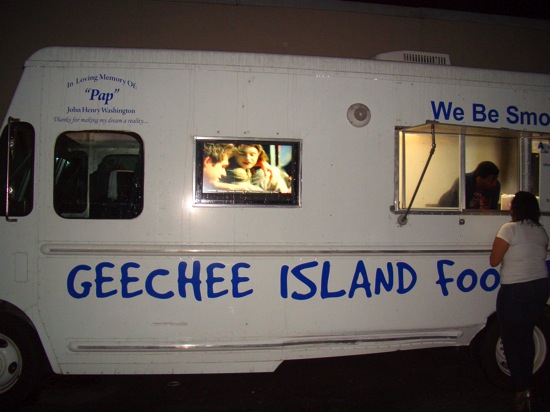 A red light and the Roti Rolls food truck lured people past a chain link fence and into Tivoli Studios Saturday night for the Home Grown party. The second annual event was a showcase of electronic music artists including the entire roster from EF Records. DJs like Jeff ET, BirdFlu, and Rocky Horror performed on turn tables, while Tivoli studio spaces were open so guests could peep resident artists’ latest creations.

Attendance was sparse at first, and a few hula hoopers and girls wrapped in glow sticks were the only people dancing to the tubthumping. But as the night progressed, the crowd grew thicker. Fashion Week attendees started trickling in around midnight — Home Grown was dubbed an unofficial afterparty, and women in high heels and short skirts were escorted out of limo vans with lanyards hanging around their necks. An open bar and ever-changing music line-up kept the masses entertained, and the former local boys Electric Friends, visiting from L.A., were a definite highlight.

Eventually, the Geechee Island food truck joined Roti Rolls in the parking lot, accommodating the growing crowd of hungry scenesters. Like clockwork, around two a.m., fashionistas from the Luxe afterparty arrived. But just as the studios were about to become saturated with models and bigwigs, the cops rained on the parade — right before it began to rain — at 2:30 a.m., shutting down the party due to noise complaints.

The very nature of Tivoli as a contemporary artists’ community would make any party seem out-of-the ordinary. We hope Home Grown is only the beginning of exciting events to come.