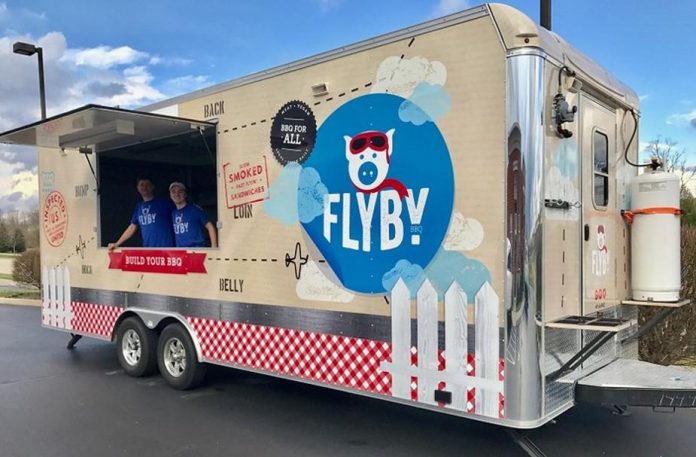 A Beavercreek restaurant that got its start as a food truck is dusting off and re-launching its mobile unit this week.

The independent and locally owned Flyby BBQ restaurant that opened in February at the Mall at Fairfield Commons has lined up a handful of gigs this week and is “looking for more,” according to Flyby’s founder, David Butcher.

“We want to use this as an opportunity to get back out into the community and bring high-quality BBQ to as many people as possible,” Butcher said. “We are very excited to give our fans the opportunity to try out unique menu items that can only be found on the truck.”

“We will have some of our classic menu with our build-your-own craft sandwiches, homemade sides and our famous Dave’s Peanut Butter Banana Pudding. In addition, we will be using this as an opportunity to test out fun new items such as Midwestern Street Tacos, Smokehouse Nachos, BBQ Slider Flights, and more.”

Butcher is a Yellow Springs High School graduate who graduated in December 2018 from Ohio State University. While at OSU, he was named No. 1 Student Entrepreneur in Central Ohio and top 25 in the United States by Entrepreneurs Organization in both 2016 and 2017.

Flyby is a fast-casual barbecue restaurant with a build-your-own-meal ordering system similar to Chipotle or Subway. It serves barbecue sandwiches, bowls and platters featuring hickory-smoked meats, a variety of toppings, and regional American barbecue sauces, as well as comfort-food-style side dishes, craft beer and sodas.

The new restaurant will be located between the existing Fusian and Bravo Cucina Italiana restaurants near the mall’s front entrance.