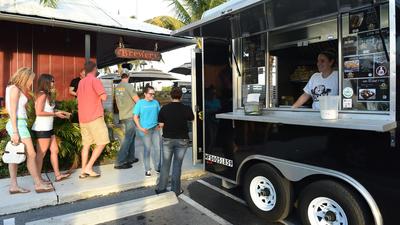 By Marisa Gottesman  |  The Sun-Sentinel

Folks who don’t have time to dine in a Delray Beach restaurant on a lunch break can grab a meal at a food truck.

The city started a pilot program in September 2014 that let food trucks operate in certain areas of the city.

The trucks are permitted in industrial areas of the city and will not be allowed to serve food downtown.

New rules will allow the trucks to set up in certain areas of the city and operate from 9 a.m. to midnight for a total of four days a week with no more than three consecutive days. Under the proposal, food trucks will not be permitted to sell alcohol or stay at one location for more than six hours.

The permanent program also includes a section on penalties for food trucks being operated without a license or those whose operators don’t follow the city’s rules on how food trucks are allowed to operate.

Food trucks will allowed to keep serving up food after the topic is up for a public hearing and final approval on Jan. 19.