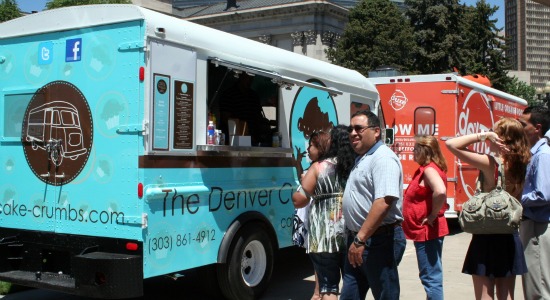 Civic Center Eats, billed as “the largest gathering of food trucks in metro Denver,” is back in Civic Center Park for the summer. The inaugural event yesterday drew such standbys as Steuben’s, which was the first truck out of the gate last summer, Stick It To Me, Chicago Louie’s, Street Eats and a few newcomers.

To kick off this year’s event, still-Mayor Bill Vidal touted the $9.5 million in improvements that have been made at Civic Center, “our front yard.” Although certain parts of that yard are still fenced off to let new sod take hold, there are plenty of park benches and umbrella-shaded tables for lunchers.

This year, Civic Center Eats has been expanded to add a Thursday installment; although the lineups will change, there will always be at least twenty vendors to choose from on Tuesday and Thursdays from 11 a.m. to 2 p.m., when lunch will be accompanied by live music. And on Monday, Wednesday and Friday, a couple of vendors will still deliver the goods.

The full schedule of trucks is available here.