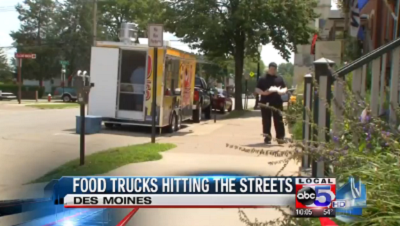 By Kattey Ortiz  |  We Are Iowa

The program was approved 4-1 with an abstention from councilman Joe Gatto, who owns a restaurant.

Licensed vendors will hit the streets beginning April 17th for six months, and will have to pay $900 to operate. The fee includes $625 for a parking hood and $275 for a license.

City council will revisit the project in 90 days to review the progress and any issues it may have.

Previously, mobile food vendors were restricted to private lots. Only one truck was allowed per lot, it was to be a certain distance away from entrances and exits of brick and mortar restaurants, and were required to move every 5-6 hours. These are just some of the rules that were made in January 2011.