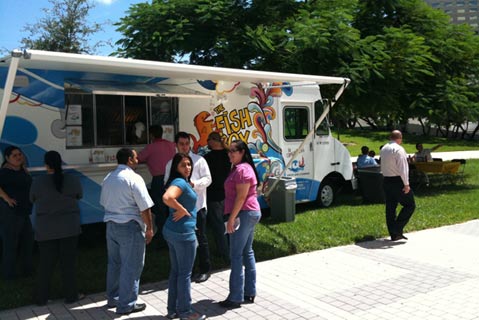 I have tasted Miami’s best sandwich, and it has a tail sticking out of it.

It’s served daily for lunch, and sometimes dinner, out of the fish shack on wheels launched this fall by La Camaronera, the beloved Cuban-American seafood market and counter in Little Havana.

The food truck is called The Fish Box, and the eye-rolling sandwich is the Minuta. It’s the freshest, most delicate yellowtail snapper, boned, lightly breaded and fried with its tail still attached. Perched between two Cuban bread rolls, the meaty white fish is served with tartar and red sauces.

The seafood is local and fresh from the Garcia Brothers Seafood Co., which has its own fleet of fishing boats.

Like fishing, finding The Fish Box requires patience. You follow the truck on Facebook or Twitter to get each day’s location. Most afternoons, it can be found at Bayfront Park, 301 N. Biscayne Blvd., in downtown Miami. The truck, which recently started dinner rounds, has been spotted evenings in the Gables, Brickell and Downtown.

It promises to make dinner-time appearances in South Beach Dec. 1-4 for Art Basel – the perfect edible art in a box.