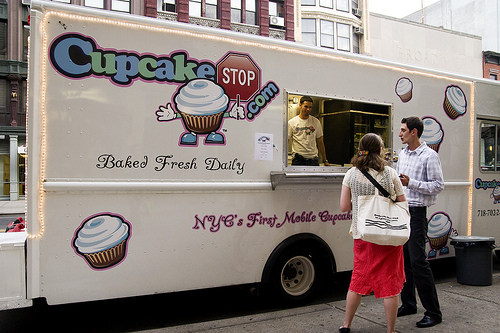 By TIFFANY RAY | The Press-Enterprise

The food truck trend is no quick-fading fad, according to a new report.

Research by the National Restaurant Association found that interest in food trucks is up from a year ago, and the western U.S. remains the epicenter of the trend.

In a recent survey, 59 percent of consumers said they would likely visit a food truck if their favorite restaurant offered one. That’s up from 47 percent a year ago. Almost one in five said they had seen a food truck in their community during the summer months, and 28 percent of people who said they saw a truck bought something.

Hudson Riehle, senior ice president of the research and knowledge group at the association, attributed some of that interest to customer convenience. “Though food trucks are often equated with chefs and entrepreneurs, they also present opportunities for operators of established restaurants to expand their operations and presence,” he said in a news release.

Of course, we’re still not likely to see them here in the Inland region. Until recently, Riverside and San Bernardino counties prohibited food trucks serving up fresh food prepared on site. They were reportedly the only two counties in the state where the popular, gourmet food trucks could not ply their trade. Riverside County still prohibits them. San Bernardino County supervisors recently approved loosening restrictions there, but only on a limited basis.

Holiday hiring could edge up slightly over last year, but probably not by much, according to a recent report.

In a survey of company hiring managers, Snagajob.com found that 51 percent of them intended to hire seasonal workers for the end-of-the-year holiday shopping rush. That’s nearly the same as last year, when 50 percent said so.

On the upside, it’s a big improvement from 2008, when only 43 percent of hiring managers intended to add jobs.

A larger percentage — 25 percent — believed sales would increase this year. Only 18 percent say sales will go down.

“We’re definitely seeing incremental improvements in the holiday, seasonal job market, even if we haven’t yet returned to pre-recessionary levels,” Shawn Boyer, CEO of the hourly job site, said in a news release.

General Growth Properties, the Chicago-based company that owns the Galleria at Tyler in Riverside, is bringing a food-truck cupcake business into one of its New York Malls, and it could be the start of a larger rollout.

Crain’s New York Business reported recently that CupcakeStop, a 2-year-old New Jersey-based truck operation, was invited to open a kiosk inside the Staten Island Mall selling not just cupcakes, but cakes, pies and other baked goods.

According to the report, CupcakeStop’s CEO, Richard Kallman, said he is in discussions with General Growth to duplicate that plan in the mall owner’s other properties.