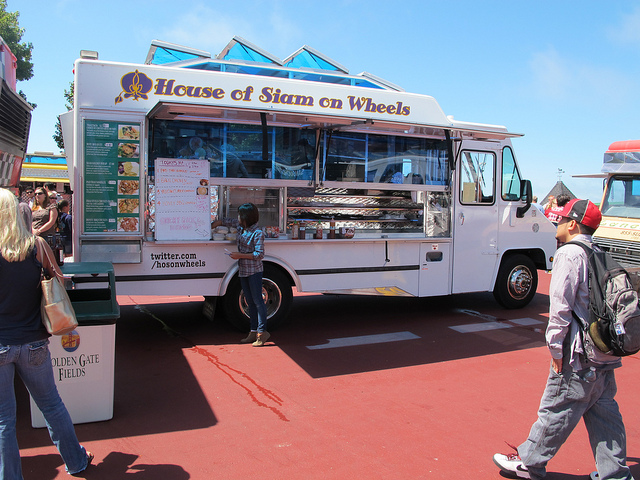 “This is great. What a day,” Los Gatos resident Reed Nelson said.

“It’s an excellent event for a first one,” added Nelson, who grew up in Saratoga and stops by La Hacienda every Friday to buy flowers for his wife. “They have everything you need as far as food and drinks,” he said, sipping a beer. “My wife and I have dinner plans, but I think we’re going to come back here. Why not support our local guy?”

The “local guy” is Russ Stanley, who owns La Hacienda and has been working with former Monte Sereno city councilman Curtis Wright to get the property annexed to Monte Sereno.

So the food truck festival is something Stanley could do with the property while the annexation issue works its way to some sort of conclusion.

Billed as the first Los Gatos Food Truck Festival, the event included lots of good eats–clam chowder, macaroni and cheese with lobster, and lobster rolls piled high, all provided by the ShackMobile from Redwood City.

The House of Siam on Wheels hit a high note with Stephanie Crowell of Los Gatos. “I drive on Highway 9 to avoid 85 and I saw the sign and decided to give it a try,” Crowell said. She declared the chicken pad thai very good.

Wright, meanwhile, was busy jostling cars in the parking lot and making sure things went smoothly. “I made it a point to talk to all the food truck owners,” Wright said. “Everyone was thrilled with the turnout and were very interested in being invited back. The coolest thing about it was that people could have gourmet food, nice beer and wine and bring their children–something you cannot easily do at a restaurant.”

Wright said he talked to a lot of people as they were leaving, and “support for additional events was overwhelming.” He estimated that more than 1,000 people attended the first food fest and said it was so successful that there will be at least two festivals each month throughout the summer.

“We hope to rotate different food trucks and bands every time,” he added. “We are arranging the parking differently to make things go more smoothly and getting more chairs.”

Many South Bay food truck festivals, including La Hacienda, are organized by the Mobile Gourmet. Visit www.the-mobile-gourmet.com for a list of upcoming events.