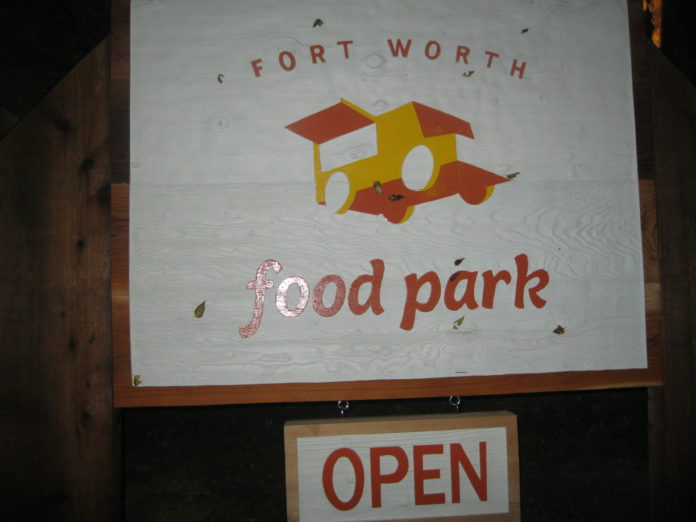 On December 2, Fort Worth joined other cities considered to be leaders in the food truck culture by opening a dedicated Food Truck Park. Based on the crowd to get in and the amount of food sold, Opening Night was a success with hundreds of people in attendance.

When first hearing the location of the Park, many questioned the how and why of putting a Food Truck Park in the middle of an industrial area, three to four blocks off a main thoroughfare. Earlier in the week I spoke to owner Chris Kruger, he explained that the location was an important part of the park atmosphere as it allowed guests to escape the hustle and bustle of the center city and take time to relax over a nice lunch or dinner while only being minutes from home. Now that I have seen the Park operating I understand that vision and agree with it. It is also appealing that some trucks, like Good Karma Kitchen will call the Food Truck Park home while other trucks will rotate through from time to time, so on any given night, menu options will always be new and fresh.

Within a short time of its 6:00 opening there was a  line of about 40 people waiting to get in.  The line moved relatively quickly, as people would the Park, a line attendant let an equal number in, so within 25 minutes I was in and ready to eat. The line served as a good crowd control and helped ensure the lines for the trucks were not overwhelming long.

The Park is situated on a standard size lot, between two industrial warehouse type buildings. Because the trucks are parked along the side perimeter of the park, once you are inside, you forget the buildings are there and it actually becomes very cozy and comfortable. With of the possibility of rain, the Park had tents set up to keep everyone dry but when the tents are down, the surrounding trees will make a nice canopy to shelter the Park but still offer an open air feel.

The Park has been given permission for eight trucks to set up but on Opening Night, as will be the case most days, six were in attendance. Red Jett Sweets, Nammi, Good Karma Kitchen, Yes! Taco,  Jake’s Hamburgers and Lee’s Grilled Cheese. All of the trucks had continuous, manageable lines, except for Lee’s Grilled Cheese, where I heard people saying they were waiting in line for 20 – 25 minutes and then waiting for their sandwich that same amount of time. As with other big events, this is an issue that all grilled cheese trucks face, most of their food cannot be prepped ahead of time and once the order is placed, the grill can only accommodate a finite number of sandwiches at any one time. It seemed that most people understood that and having that truck next to the free beer line seemed to help make the wait more tolerable.

The Park has quite a few picnic tables, which makes food truck eating more manageable. Spread throughout the table area were both trash cans. and recycling bins. At the back of the Park are restroom facilities and a deck where live bands can set up. The Park is licensed for BYOB and dogs are welcome.

It seems that every detail has been considered when it comes to this Park and it has promise of being very successful. The truck owners were happy with the first night and the guests were happy with their food,  the convenience of parking, and all of the details that set the atmosphere of the Park. The Park will be hosting special event nights from time to time including movie nights and live bands.