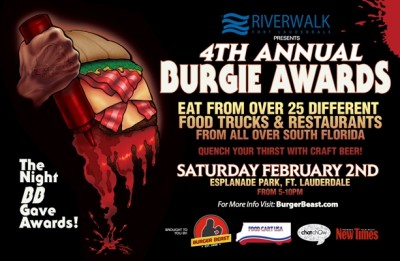 Ft. Lauderdale, FL – In 2009 South Florida Food Blogger Burger Beast wanted to honor the unsung heroes of the South Florida Food Scene with Awards. His “Burgie Awards”, the first of their kind were a sensation. SFL Restaurants & Food Trucks have now taken to proudly displaying their “Burgie Awards” year round. Voting for the 2013 Awards has been going on at BurgerBeast.Com since November 4th, 2012 and will end on Wednesday January 9th, 2013.

Riverwalk Ft. Lauderdale is bringing the 2013 Burgies to Esplanade Park in Ft. Lauderdale on Saturday February 2nd. It will be the 1st time the event takes place in Broward County. If you’re a food fan then this is the event for you. 5 South Florida Restaurants & over 20 Food Trucks will be on hand selling to the public a variety of great eats. Brown Distributing will have an array of Craft Beers to choose from.

This will be the last appearance of The Fish Box (one of the pillars of the Food Truck scene) as it will be retired after this event and the return of the über popular Sugar Rush. The Treehouse Truck from Orlando will also be a part of the festivities: