After months of talk, a name change and lots of details to finalize,Clearfork Food Park is hopefully less than three weeks away from being Fort Worth’s next food truck park. Clearfork will be at 1541 Merrimac Circle, just off of I-30 and University.

Park operators plan to be open for lunch and dinner, seven days a week with six to eight trucks on weekdays and the ability to support up to 12 for special events. Several Fort Worth-based trucks have already committed to being at the park on a rotating basis, including Gepetto’s Pizza, So-Cal Tacos and Fred’s Wagon, all of whom have publicly announced their participation. I expect many more trucks from Fort Worth and Dallas to announce that they will be posting up at this park in the coming weeks.

I have not seen the park site yet, but one of the park owners, Grant Huff, tells me that it will have almost an acre of parking spaces, a covered pavilion for dining and a permanent building. It will also feature “Fred’s Bait Shop,” run by Fred’s Texas Cafe, as well as sales of beverages of all kinds. The park is adjacent to the Trinity Trail east of University Drive, and it sounds as if it considers itself an extension of the trail, incorporating grassy areas, trees and landscaping. 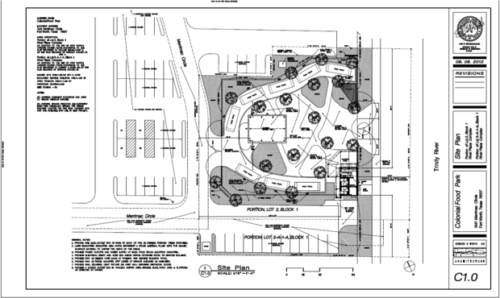 A sketch of the park (above) lays out a nice venue, and the owners anticipate taking full advantage with plans for live music on the weekends and for hosting community events such as farmers markets and craft shows. I think that Clearkfork will be a nice addition to the Fort Worth food-truck scene and that it will bring food trucks to a side of the city that does not see them nearly enough.